Copyright and all that Jazz….

Copyright is a concept that is important to all of us–whether we recognize it or not– , if for no other reason than we are all affected by it everyday each time we listen to music,  read a book, look at a picture,  turn on the internet, the TV or the Radio…and so on.  Copyright is the boundary where the real world meets our little world and splits hairs.
While European Chess Union has recently taken steps to try to copyright transmission rights via the internet of officially sanctioned chess events, the copyright of individual chess games is another soul waiting in the corridors, ready for the right moment to appear.  Chess is a lot like what down-loading music was several years ago before the state got tough: all of us are pirates, even ChessBase!
One day that might all change if some win their case….but not if Professor Lessig has his way.

”Copyleft crusader and Harvard professor Larry Lessig gave a new talk at CERN last week about copyright and how it has affected open access to academic or scientific information, with a bit of commentary about YouTube Copyright School. As usual, it’s blistering commentary. “It’s time to recognize that free access – as in ‘free’ as in speech access – is no fad, and it’s time to push this non-fad war broadly in the context of science,” says Lessig.
Whereas copyright tends to focus on protecting artists’ ability to make money from their work, scientists don’t use similar incentives. And yet, her work is often kept within the gates of the ivory tower, reserved for those whose universities or institutions have purchased access, often at high costs. And for science in the age of the internet, which wants ideas to spread as widely as possible to encourage more creativity and development, this isn’t just bad: it’s immoral.”   Read more here 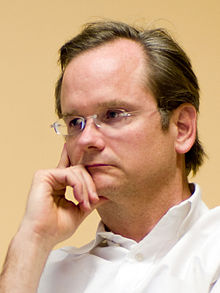 http://www.lessig.org/blog/
Lawrence “Larry” Lessig (born June 3, 1961) is an American academic and political activist. He is best known as a proponent of reduced legal restrictions on copyright, trademark, and radio frequency spectrum, particularly in technology applications.
He is a director of the Edmond J. Safra Foundation Center for Ethics at Harvard University and a professor of law at Harvard Law School. Prior to rejoining Harvard, he was a professor of law at Stanford Law School and founder of its Center for Internet and Society. Lessig is a founding board member of Creative Commons, a board member of the Software Freedom Law Center, an advisory board member of the Sunlight Foundation and a former board member of the Electronic Frontier Foundation.
In 2002 Lessig received the Award for the Advancement of Free Software from the Free Software Foundation (FSF), and on March 28, 2004 he was elected to the FSF’s Board of Directors.  In 2006, Lessig was elected to the American Academy of Arts and Sciences. Lessig is also a well-known critic of copyright term extensions.
He proposed the concept of “Free Culture”. He also supports free software and open spectrum. At his “Free culture” keynote at OSCON 2002, half of his speech was also about software patents, which he views as a rising threat to both free/open source software and innovation.