Continental: Kovalyov IN/ Hansen OUT

One of the America’s most prestigious qualifying tournaments. A total of 75 titled players, including 23 GMs and 15 IMs, fought it out for 4 qualifying spots for the upcoming World Cup , part of the World Championship cycle. Two Canadian grandmasters participated: Anton Kovalyov and Eric Hansen. As written in yesterday’s blog, going into the last and decisive round both Canadians still had chances to qualify, but neither could afford to lose.

Fate would have it that Eric spoiled good chances against Granda and lost. His 7.5 points final score, while a superb tournament result on its own, was not enough to make the cut. Disappointing, no doubt, but that is the way the ball bounces.  Eric took it all in stride: 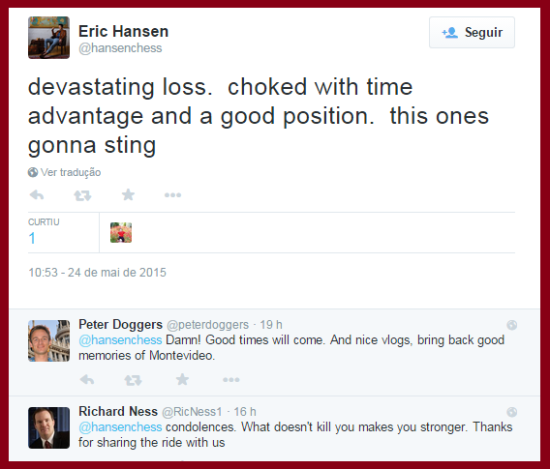 Anton needed a win inorder to guarantee his qualification spot, but he could only draw against Jorge Cori.  However, his 8 point finish was enough to allow him the opportunity to fight it out in a blitz elimination tournament for one of the other 3 qualifying spots in play.

Anton finished third, thereby qualifying for the World Cup later this year. Congrats! And especially, congrats to BOTH Eric and Anton for their heroic efforts!

And finally, NO CONGRATULATIONS at all to the CFC executive who steadfastly REFUSED to even report how Eric and Anton were progressing!  INFACT, of all the federations represented in the Continental, Canada was the only federation that did not report even a single word on the championship to its membership. Not on its Facebook account; not on its official website; not on its public forum. Nice job promoting chess, Vlad!

The president of the CFC seems to have made it his priority to destroy what little good there is still left in Canadian Chess.  Last year he personally eliminated the Canadian Open, Canada’s longest running and most prestigious tournament. (His reason:”Too much work for the organizers.”)  The CFC membership is estimated to decline between 15%-20% just this year.

For six months, the CFC prez did NOT allow anyone to UPDATE the front page of the CFC official website (”I take personal responsibility, so don’t touch it!”)  The CFC magazine (for members) is more than 5-months behind schedule…and counting.

With Vlad Drkulec’s refusal to allow those in charge of the social media tools at the CFC’s disposal to cover how Canada’s top players were doing in the prestigious Continental, Vlad has become the first CFC president to impose TOTAL censorship of the chess press in Canada.  For PERSONAL reasons…ofcourse!

The tournament was an especially big success for Argentina, which saw three of the top 5 spots go to its players. Congrats!

If you are wondering how, if only 4 qualification spots were available, why three players from the Blitz tournament qualified, the answer is that BEFORE the event Mareco, Granda and Cori had already qualified, so their ‘tournament’ qualifications were given to others to fight over.