Chess Quote of the Day

THE GREAT CHESS MOVIE
(and other little white lies) 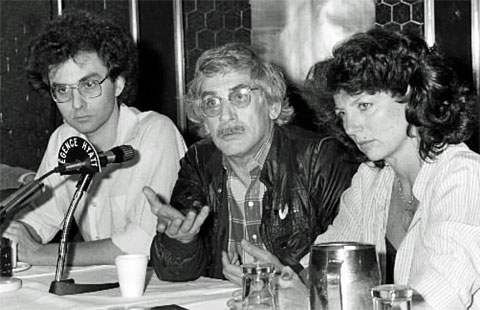 Camille, Gilles  and Helene at a press conference
In 1982 ‘The Great Chess Movie” was screened in front of a friendly Montreal crowd of chessplayers who had been invited for the occasion.  I was one of them.  I can’t say that the crowd was 100% sold on the story line, but the film was entertaining and  interesting–considering it was at the height of the Cold War, propaganda and distortion of the truth might be forgiven — but the film also contained some wonderful footage of Korchnoi, Karpov and some others.
Bobby Fischer refused to be filmed, by that time already having become a recluse and showing signs of extreme paranoia.  The producers went to LA to speak with him , but without any success.  Chessbase today carries the first part of an equally interesting article by Coudari, that fills in the details of his encounter with the American superstar.
Not much is new in the article for me, as I had already spoken to Gilles Carle and Camille Coudari several times about this encounter.  What is new , however, is Camlle’s fascinating story about a night-long discussion that he had alone with Bobby.
I find it difficult to accept  100% this story, for a number of reasons, the least being that it is ENTIRELY new!  Camille had never mentioned it to me before, and ofcourse Gilles Carle and Bobby Fischer are both dead now and so can not confirm its accuracy.

Fischer was a loner and did not warm up to strangers.  Remember the paranoia.  Certainly, he would not have tried to indoctrinate Coudari with his ideas, no matter how much Fischer wanted to believe them.   Camille tries to convince you otherwise in this article…
HOWEVER, I recommend the readers to take a glance at the article mentioned above (the second installment will come soon).  If nothing else, it gives some insight into both players!

”By 3 a.m., exhausted by the long day’s trip and having basically argued their case the best they could several times, Hélène and Gilles said goodnight and each went off to sleep. I would have liked to go to sleep myself, but Fischer was all gung ho and showed no sign of calling it a day. I was afraid that my cutting the meeting short might offend him and jeopardize the negotiations, so I found myself having to talk with him all through the night.
The conversation very quickly turned away from chess and the documentary as Fischer brought up what was clearly his favorite subject: conspiracy theories. It was obvious that he was eager not only to share his views, but also to bring me around to them.”
Camille Coudari Link
Share