Chess quotation of the day

SPRAGGETT ON CHESS
NOT all chess federations are 3rd world-quality  cesspools like the CFC, run by failed chess organizers, alcoholics  and unemployed street people looking for glory, handouts and easy bucks. Witness what Polish superstar Mateus Bartel (winner of the recent Aeroflot tournament and the most recent Polish Championship) had to say of his own federation, one run by professionals with the objective to raise the status of chess from smelly, backroom cafes infested by aging amateurs to serious-minded young professionals eager to put their country’s honour on the chess map. 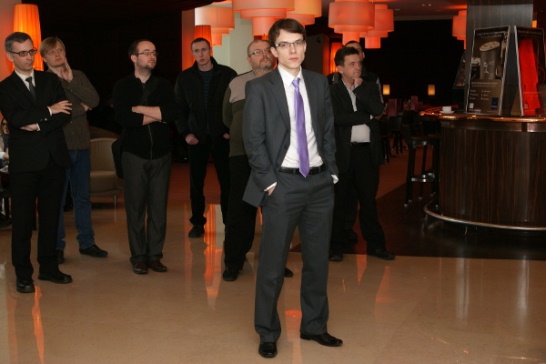 Polish superstar Mateusz Bartel at the completion of the Polish Chess Championship
QUESTION:  What’s your assessment of the Polish Chess Federation board after three years in power?
BARTEL: ”It can’t be anything other than very positive.   Of course, the Federation could and still can do more – that’s always the case.. . There’s still a lot to do and they can’t rest on their laurels, but the facts are indisputable – more and more serious companies are cooperating with the Federation, we’ve got good Polish Championships, the Federation has an impressive headquarters and they’re trying to help (teach) the regional federations to acquire sponsors.
Next year we’re going to have the Men’s European Championship and the European Team Championship in Poland. Finally, we’ve got the Wojtaszek COMARCH Team (a project where the Polish-based global IT firm Comarch is sponsoring cooperation between Wojtaszek and some of Poland’s most promising young chess players – CiT). There’s a lot more that could be mentioned…”
Link to interview
Share