Following up on last Friday’s blog about the popular chess teacher F.Wilson’s trial regarding (alleged)sexual abuse of two young children (while teaching chess in schools), yesterday the trial came to an end without a verdict. LINK  The entire legal process received considerable public attention–both nationally and internationally, and readers can find several YouTube videos from actual court proceedings, including Wilson’s rejection of a plea agreement. Below is the latest video, with Wilson and his attorney commenting on yesterday’s events.

It had been rumoured for some time now that FIDE was going to organize its next Men’s World Championship somewhere in the ‘States.  Finally, yesterday, it was publically announced by Agon (the commercial arm of FIDE) that the 12-game match will take place somewhere in New York between the 11th and 30th of November. A website has been hastily put up.

Ilya Merenzon (photo) is the CEO of Agon and judging by the WSJ report is confident, but tight lipped, about the prospects of getting an American company to sponsor the match, which has been announced to be a minimum of 1 million dollars.

“Magnus really wants to be associated with American companies,” said Merenzon. “We are completely in sync with Magnus’s manager on this.”

Readers might remember that New York is no stranger to world championship matches, the Kasparov vs Anand 1995 immediately coming to mind.  Before then, Lasker and Steinitz also played part of their two marathons in the city.

However, this time round it might be that there will be even BIGGER difficulties getting any financial support.

FIRST, the latest US sanctions against FIDE president Ilyumzhinov must weigh heavily on any decision by any homegrown American company to get behind the New York match. SECOND, the run up to the 2016  US presidential elections is simply going to make virtually impossible any meaningful momentum-building in the pre-match publicity campaign.

The match organizers deliberately chose the dates to follow the November 8,2016 US elections, which is important, but it is unlikely that any sponsor would be happy with the kinds of statistical projections regarding spectators/media coverage that a world championship normally gets.  When Carlsen beat Anand in India several years ago (2013) to become the World Champion, the official numbers were so low that they were not even published! And what was published in the chess press was fudged and most likely invented. I remember wasting hours trying to sort out the BS from the REAL data… 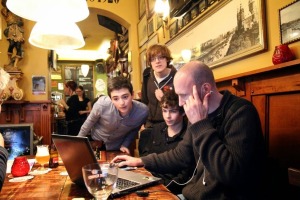 Merenzon, however, appears to be undaunted and seems to be preparing for an even stronger presence online this time around: “We’re focusing 99% of our efforts on online viewership.” adding that the online broadcasts will feature a variety of camera angles, an educational component to help explain the action, and two commentators analyzing the match live, which has become commonplace.  (Readers might recall that Merenzon already has some experience organizing a world title match in 2014 in Sochi).

I have  already written several times on this blog  about the failure of this online model to attract any meaningful spectatorship amongst non-chess players.  Perhaps Merenzon will have better success this time around.  In anycase, as a chess player, I am pleased to see a World Championship match return to the Big Apple!

Should be an exciting match!  For the first time in a long time, both participants are attacking players par excellence.  Hou Yifan must be considered the favourite, but Mariya Muzychuk will have the entire Ukraine fleet of grandmasters behind her. (with its accompanying nuclear-tipped opening arsenal). No doubt Muzychuk’s training and preparation has been specially designed for her Chinese opponent.

Good luck to both players!!