Those of my generation fondly remember the first Doctor Who series that debuted in the early 1960’s and never looked back.  So successful was this series that the BBC still produces it (today), though ofcourse with a new Doctor. (The series out lived a number of them!)
I got a kick out of the article below from this week, where the new Doctor Who (Matt Smith) mused that his character would probably prefer a good game of chess to a hot session of sex! 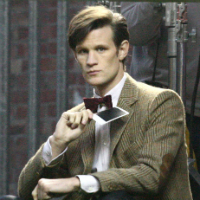 Smith thinks his character would choose a quiet life…

Matt Smith has said that Doctor Who would rather play a nice game of chess than have sex.  The actor was asked on Alan Carr: Chatty Man if the Doctor would ever have a night of passion inside the Tardis.

Smith added that he hopes the show’s makers will bring back former Timelords such as Colin Baker and David Tennant when Doctor Who enters its fiftieth anniversary in 2013.