Cheating in chess has always been a much bigger issue than drug use, and is an issue that many prefer to sweep under the rug rather than deal with publically.   Recently, especially following the FFE disclosure and suspension of 3 of its best players cheating during the last Olympiad (2010), there has been much less shyness in the press about bringing up this issue, and more stories are emerging of this growing problem.

ChessVibes  reports today of a cheating incident that took place in the last round of the German Chess Championship.  Fortunately, for all involved, the player suspected of cheating later confessed.  Now it remains to see what kind of suspension the German Federation will deliver.  It is widely expected to be not less than 2 years.
Chessvibes writes:  ”A participant of the German Championship, which concluded on Friday in Bonn, was caught cheating. FM Christoph Natsidis used a chess program on his smartphone during his last-round game against GM Sebastian Siebrecht to analyse a position from the game. The 23-year-old player from Bannewitz, Germany admitted that he cheated, and was excluded from the tournament, missing out on an IM norm he had scored after 8 rounds.” 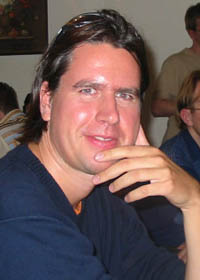 GM Siebrecht (a friend of mine) said later:
“We had reached a complicated position. I had taken on b2 which was a bit risky. However, in a very concrete position where calculating was necessary, he was constantly away from the board. Three times, I made a move and it took 8-10 minutes for him to show up at the board. Naturally I started looking for him and I even waited for a while in the toilets. One toilet was occupied, but I didn’t hear any typical ‘toilet sounds’.

During the game  Khenkin came to me and asked: ‘What’s going on? Where is your opponent?’ I decided to go to the arbiter and try to find Natsidis together. Then, indeed, we did find him in the toilet, but the arbiter did nothing, which made me very angry. I could not play a normal game anymore and in a position that was still complicated, I decided to offer a draw, which he accepted.”
“Then I knew enough, and I walked away. Later the arbiter came to me and told me that he had asked if the phone had a chess program installed. Natsidis said yes, and showed it to the arbiter – the program was showing a position from our game, about five moves before the end.”
Natsidis was caught red-handed, but didn’t sweep it under the carpet. He went to his opponent, to apologize. Siebrecht continued:
“He came to me and admitted that he did it, and then apologized. He said: ‘I’m completely stupid, I’m really sorry.’ And indeed, it was very stupid of him to do it in the final round, because he had already scored his IM norm after the penultimate round.”

FINAL PLACINGS IN THE GERMAN CHAMPIONSHIP 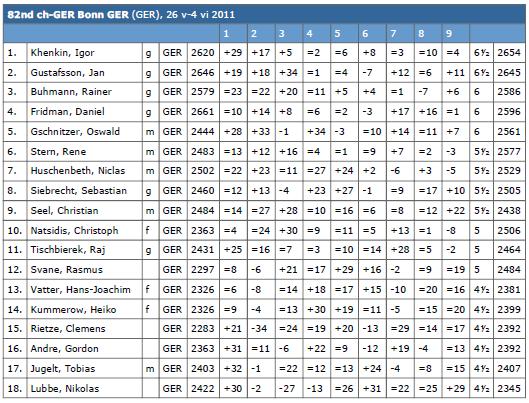 _________________________________________________________________________
MEANWHILE….
In general, cheating is born of  ”opportunism’‘; giving in to temptation and doing something that one would normally never realistically think of doing. Perhaps one thinks that one can get away with it, that no one is watching or will suspect anything.   In the German case, with the IM norm on the line, Natsidis was tempted to use his smartphone to help him secure the necessary edge. (Perhaps he even used it in earlier rounds!)
In the last round of the just completed Canadian Championship there was a  case of alleged cheating in the game between Plotking and Calugar  where 2 titles were on the line. Mr. Plotking was awarded a FM title for losing the game (he would not have received the title had he drawn the game.) This incident has already been extensively reported in previous blog articles here.

Cheating is very difficult to prove, and in the absence of a direct confession (as in the case in the German Championship), often all one has is indirect evidence and suspicions.  However, this is sometimes enough for arbiters to exclude certain players and their results by using the section of the rule book that deals with ”bringing the game into disrepute”.

Mr. Plotking wrote on a message board last week a sort of defence of his actions in his game against Calugar.  While not a confession by any means, Mr. Plotking did very little to salvage his reputation. We could call his defence: ‘The $166 defence”.  Plotking did not refute any of my observations from my original blog entry , nor did he address the FUNDAMENTAL question of whether he deliberately refused the draw because losing was more profitable. Instead, Mr. Plotking feels we should be focused on a $166 prize that he might have won…(!)

In essence, Mr. Plotking argues that he is smarter than everyone else:  he just shrugs his shoulders and challenges anyone to prove that he had cheated!  Plotking even goes to great pains to list numerous examples from his tournament praxis; yes, certainly  he could have easily lost numerous games by trying too hard to win money prizes.  All would have been unnecessary losses.

Furthermore, in an earlier post he even bragged :
”…I believe you just overestimate my chess level. I am not a 2300 FIDE-rated player. My rating fluctuates between 2200 and 2250 last few years, that means 2250 is very close to my top.

More important, I even don’t know how I can play better. My opening knowledge is below zero and I don’t plan to make any significant effort to improve it. I believe almost every 2000+ CFC-rated player knows openings better than me. In my last 4 games against higher-rated opponents I made mistake on move 7 (Hamilton), 5 !!! (Gerzhoy), 9 (Panjwani) and 6 !! (Samsonkin). Pretty impressive numbers, right?”

We are supposed to conclude that Mr. Plotking can lose any given position at any given time or on any given move…and this is his right!  But don’t accuse him of being unethical!

What can I say?   If Mr. Plotking wants to claim that he is an idiot –and idiots lose all types of good positions unnecessarily–then he is welcome to it!  I doubt anyone would be proud of such an affirmation…it seems a lot like the defence of  insanity to avoid being tried for murder!

In the real world cheating  is not a crime and nobody is hurt, but neither is it something to encourage, let alone to brag about and then dare others to prove it!  In sports, cheating– in all of its varied and imaginative  forms–leaves a bad taste in one’s mouth.

The chess community has a right and an obligation to expose those examples where the game of chess is brought into disrepute.  The Plotking vs Calugar game brings the chess into disrepute.  It is important for the leaders of the chess community to denounce this kind of behaviour.  It took place during a national championship.  What is more, the titles of FM and IM deserve more respect than Mr. Plotking showed them.