The 3rd round saw, surprisingly, more low-quality chess.  World champion Anand–with the White pieces– was fighting for a draw almost right out of the opening: Nigel Short put all of his pieces on the wrong squares; and Mickey Adams seemed to have  overlooked that the speculative piece sacrifice he declined had eaten one of his pawns!  Only the Carlsen vs Nakamura game did not feature any major blunders, but  Nakamura’s 5 or 6 inaccuracies in time-trouble will exclude the game from being included in any anthology of great chess.

Am I being too harsh? Perhaps…but for a tournament promoted as perhaps the greatest ever on English soil, I think the organizers forgot to tell the players that  merely showing up is not enough to earn their caches (!): they also have to play well!

The flip side of  all this is–of course– that the spectators were treated to an exciting round: with such play the outcome is always in doubt!  Following yesterday’s equally exciting round, the London tournament is a big hit with fans and must be registering a record number of hits on the homepage.  Certainly the sponsors must be thrilled….

Adams
Black has just hacked off White’s h-Pawn.  Here Adams must take the piece;  this would result in a very complex position where White can not possibly be worse, though objectively a draw by perpetual check (somewhere) would seem a likely result.  After 19.pxh3  Qxh3  White has a pleasant choice between 20.Qe2, 20.Pxc5 or 20.Bb5.  The problem is to decide which one to choose…my computer can find little wrong with any of them! 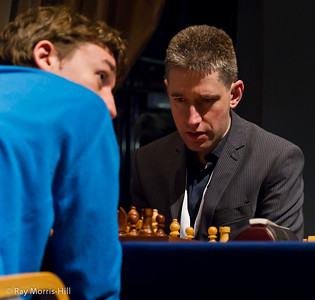 HOWEVER,  Adams played the unexpected 19.Nh2? and after 19…Bd7 McShane was not just a pawn up, but had the better position to boot!   Kramnik (who was commenting on the games this round) opinioned that Adams’ poor play today was  just an ‘age’-thing  (link), while Adams merely shrugged it off: “I just missed everything simply. I had to play something practical.”
___________________________
POSITION AFTER 25 MOVES:
Short

What say you, Nosher?

Another uncharacteristic performance by the English superstar!  I can not remember the last time he had such a passive looking position: normally Short plays very actively with Black. Here however, with the Knight stuck on b8 and White about to barrel down the c-file, Short no doubt was unhappy.  Simply 26.b5! would be strong, if then 26…a6 then 27.Nd2!? is no picnick for Black.  (The game went another route….Aronian played less incisively but still scored the point.)

Mark Crowther (of TWIC fame) saw a silver-lining for Nigel Short: ”I guess a disappointed Short will at least be feeling better about his play than after round 2…”  (Short was nuked the day before by Kramnik)

”To exchange, or not to exchange…”–Bobby Shakespeare
NO DOUBT the game of the day was Carlsen’s win over Nakamura…

Carlsen summed up today’s effort on his blog:
”Having struggled for nearly seven hours against McShane yesterday I opted for a quiet line today. The Giucco Piano 3.Bc4 with d3 and c3 does not offer any great advantage, but I gradually got a position that is easier to play with white. He spent more than half an hour after 12.Be3 and decided not to exchange the black squared bishops. In the late middle game I anyhow played f4 and enjoyed an open f-file. He controlled the b-file and had enough defending pieces around his king. With correct play a draw would be the likely outcome, but when he allowed the exchange sacrifice Rxf6! the position got extremely unpleasant for black. Short on time he made a few more inaccuracies and resigned after 40 moves.”
Nakamura

Carlsen
The Italian Opening appears to be something new to Carlsen’s White repetoire.  I have not seen him employ this  before this game…perhaps (no doubt!) in blitz games, but never in a serious game.  I suppose the idea was to avoid Nakamura’s Spanish Opening preparation…Carlsen usually plays 3.Bb5.
This Bishop move is becoming very popular today in all levels of tournaments, especially given the amount of theoretical work that has been done on the Marshall Gambit, not to mention an assortment of alternative lines such as the Schliemann (3…f5!?) or the …Bc5 lines that Shirov has popularized.  It is just so damn difficult to avoid playing 40 moves of theory in those lines…often the Black player doesn’t make a single move of his own!
In anycase, the Italian Opening (or its sister, the Two Knights Opening) does not presume to cause Black any great difficulties in the opening either.  But it does have the advantage that Black can only play 12 moves of ‘theory’ and the resulting position still has a lot of play in it…
The first critical moment in the game appeared around move 12 and lasted for several moves:

I have played on a number of occasions the Italian Opening ( specifically the d3,c3 variation) and I have noticed that an important question that raises itself is whether it is good to exchange Bishops (and for whom) and if so, which Bishop should be exchanged?  And should White exchange or Black?  Theory gives no concrete answer , and of the games that I have seen thus far the jury seems to be out on this matter.
In anycase, this issue is important because it is around here that Nakamura began to consume large amounts of time–a factor that became decisive towards the end of the first playing session.  Curiously, Nakamura refused to exchange either Bishop, even though both are very playable…after the game Nakamura is quoted to have said ”I used too much time …”
PLAY CONTINUED:
12… Ne7 13. Nh4!?

Nakamura was having difficulty to decide whether to exchange or not, and which piece, and was now running short of time.  Korchnoi once remarked that Carlsen was a very gifted psychologist in chess, and I think that Korchnoi had in mind the type of position that appears on the board at move 15:  could he be that the Norwegian star sensed the indecision in Nakamura during the game and deliberately played to gain time on the clock?
In anycase, exchanges are now unavoidable:
15. Nxe7 Qxe7 16. Bxa7!  Rxa7 17. f4

White’s play on the King-side is held at bay by the counterplay on the Queen-side.  The position is balanced…but the clock is not!  The game proceeded logically for the next moves and the next critical position was after White’s 29th move:

White had just played 29.Bd1, trying to angle for h4 without giving away the g4 square.
Black is perfectly fine here.  White does not even have a threat.  For example, Kramnik proposed the logical looking 29…Rb1!?, which is reasonable, and now if 30.h4 Black has 30…Rxd1!  31.Qxd1  Ng4-ch! which obliges White to return the exchange, when not much would be happening.
Another suggestion was 29…Ra8, a much more complicated line , envisioning 30.h4 Qa5! 31.Qf2  Qd8!  taking the sting out of any possible exchange sacrifices on f6.  The position is messy, but not better for Carlsen.
INSTEAD, SHORT OF TIME, NAKAMURA BLUNDERED:
29…Rfb8? 30.h4!  Qg6 (forced) 31.Rxf6!