The 3rd edition of the London Classic kicked off yesterday.  Eleven of the top players in the world, including World Champion Anand and wunderkid Carlsen.  A single round all play all tournament , the tournament ends on the 12th. The prize fund is 160,000 euros, before tax. (That is, IF the euro does not collapse before then!)

The time control is 40 moves in 2 hours; followed by 20 moves in 1 hour; followed by 30 minutes to finish  the game, though I have seen it written on some sites that it is 15 minutes plus 30 seconds per move to finish. The Bilbao scoring system is used: that is, 3 pts for a win and 1 pt for a draw.

Only one game was decisive in today’s first round: Carlsen defeating a demoralized Howell.  Hardly the great game that some commentators tried to label it, Carlsen made a stock pawn sacrifice –the timeless  ”sweeper-sealer”–on the Kingside, gaining e4 for his Knight,  and brought about a position where the English grandmaster could hardly find anything constructive to do.  Certainly, Carlsen was risking nothing with his sacrifice. 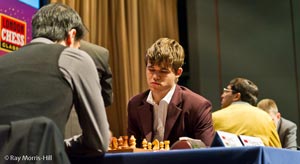 The idea is as old as chess itself. Games between Capablanca, Lasker and Alekhine readily spring to mind.  The sweeper-sealer is more often seen today in openings such as the Benoni; the basic idea is to gain a square for a minor piece (most often a Knight) and to use the other pawn to paralyze the opposing pieces.
There is some doubt as to whether White’s last move (18.f5) is as effective as 18.Qh5!?, but I leave it to others to answer that.  It seems to me that White has achieved the kind of position where he could go to sleep and never have to worry about Black making any serious threats.  White always has the Nxf6-ch move tearing open the Black King position; and should the Bishop get a chance to retreat from f6, then White will be able to push forward his juggernaut pawn on f5.
In anycase, certainly not an easy position to play with the Black pieces!  Carlsen later commented:  “Decent enough game, disappointed I couldn’t calculate properly at the end.”   For his part, a dejected Howell  squeaked:   “Lack of confidence, bad form…”   Link
The rest of the game was interesting , but not very convincing.  Howell quickly found himself in a lost position, overlooking some elementary tactics.  He then appeared to make his sole objective to make move 40 before throwing in the towel.  The curious thing is that Carlsen also sensed this and he started to let slip his advantage.
The final insult was just when Howell had reached the best position he had for the previous 20 moves, he resigned with only 3 seconds left on the clock!  Both players thought that it was going to be a quick mate, but analysis showed that infact Carlsen would have had his work cut out for him grinding down his opponent in an ending with an exchange to the good!!

Black can play on with 40…Qxf5!
IN ANY CASE, I leave all this for the reader to discover for himself!  If you need some hints, then try this link for an analysis of the final position.