September 14, 1932—March 8, 2013
I just heard the sad news today that Chilean-born (Santiago) master Carlos Jauregui passed away on March 8 in Milan, Italy.  Carlos was 80 years old.  He is survived by three daughters and not less than 7 grandchildren and great-grandchildren.  My most sincere condolences.  Obituary HERE
I knew Carlos reasonably well, especially since he spent a number of months in  Montreal (1974) after fleeing Chile  when  Pinochet took power in a bloody coup  (1973).   He was a real gentleman, soft spoken and friendly to everyone.  Carlos came with his wife, Nelly, and their four children, and would eventually make Canada their home.
Like many left-leaning intellectuals  sympathetic to Salvador Allende,  (Carlos was a physics professor), staying in Chile was not an option: thousands disappeared and were killed simply for their politics.  Even more were tortured and repressed.
What was Chile’s loss soon became Canadian chess’ gain as Carlos was quite active, playing in numerous Canadian Opens (’74, ’77, ’83 and ’86) and Canadian Zonals (’78, ’81 and ’87).
Carlos was a strong master-level player who had participated in a number of  strong international events in the 1950’s and 1960’s and had taken part in numerous national championships.  He also represented Chile at the Olympics in 1956 and 1964.
While Carlos results were not outstanding and were more often than not  middle-of-the table finishes, he was very passionate about chess and even has the distinction of having crushed Bobby Fischer in 1959 in  Santiago ! (Game at end of blog, with a little story with it) 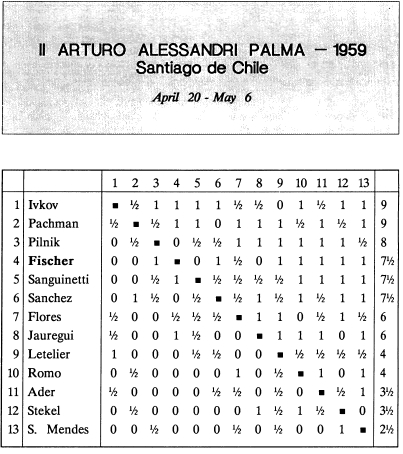 I had the pleasure to play Carlos not less than 4 times in over the board play.  The first time was in the final round of the Québec Open (1974) and we both needed to win.  Though I don’t have the scoresheet, I remember that I was White and it was a Saemisch Kings Indian.  Super complicated and everything was decided in a wild Blitz finish, which I had the good fortune to survive.
The other 3 games are available in the databases.  While my score is a perfect 4-0, this does not accurately reflect what happened in the games.  Carlos was always a difficult opponent for me.
Possessing a very high level of strategic understanding in his play, Carlos has played some very nice games.  He was also an excelent tactician.   Because he was an amateur and had limited time to dedicate to the game, however, Carlos was never able to solve his chronic time-trouble problems.   As a result, Carlos’ tournament performances were never consistent enough to get the IM title.  Even though he certainly deserved it, in my opinion.
Below is a short selection of games and positions from Carlos praxis.  ENJOY!
DE SOUZA MENDES

JAUREGUI
From Santiago, 1959 (tournament mentioned above).  Black has played a very risky opening, capturing a pawn at cost to his development.  Carlos plays with great energy:
12.Nf5!

Threatening, amongst other things, to capture the g-pawn with check.
12…0-0?!

JAUREGUI
Tel Aviv Olympics, 1964.  Carlos played some excelente chess there!  Here is a typical Jauregui game, strong strategic under-current, full control at all times and a painful finish for Black, who is almost squashed to death.
Hard to believe that this game was played almost 50 years ago, it is so modern!  A wonderful exemple of how to demolish the Benoni…

From the Canadian Open in Fredericton, 1977.  Position after White’s 34th move (34.Rh2)  Carlos had earlier correctly sacrificed a piece on positional grounds, enabling him to get some attacking chances.  The White King is now trying to slip away to hide in the centre…
34…Bxh3+!

Looks logical, but infact should lose!

BURGALAT,F
Mar del Plata, 1953.  Carlos and I shared the same bad habit: we liked to play the Dutch Defence more than we should!  But here things have gone excellently for Black and he has created attacking chances on the Kingside.  The position is ripe for a break-thru, but where?
BLACK TO PLAY AND WIN!
———————————
TACTIC!
gm   PACHMAN

JAUREGUI
Santiago, 1959.  Position after White’s 32nd move.  Pachman has built up a powerful attack but Carlos seems to be holding, atleast for the time being.
BLACK TO PLAY AND WIN!
———————————–
ANOTHER NICE JAUREGUI WIN!
JAUREGUI

SABORIDO,R
Tel Aviv, 1964.  Carlos played some great chess at this Olympiad.  Here the White Kingside is a bit open, but White soon intends to put a Rook on the g-file and then start piling up the pressure.  It looks as though nothing can stop this, especially since the Black Queen seems so isolated and useless….but Carlos has a trick up his sleave!
25…Bxd4!! 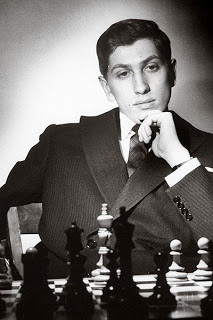 Santiago was one of Fischer’s least successful tournaments, even though he did play one or two really nice games.  But against the young Jauregui he was simply wiped off the board!
Grandmaster Pachman (co-winner of the tournament along with Ivkov) recounted  in his memoirs a little story before this game was played:
—————————————————————-

”Two days later I walked the streets of Santiago with Jauregui, a young player from Chile. We talked just about anything under the sun — about Kordileras, beauty of chillean women, quality of chillean wine — when suddenly, on the street in front of the tournament hall, we ran into Bobby.
“Aah, Mr. Pachman,” he greated us already from distance: “so, today you prepared my oponent agains me!” Only there and then I realized that Bobby actually plays Jauregui axactly that night.
“But of course, Bobby; and I must warn you that he is prepared exquisitely!” I said promptly and Bobby’s face grew a frawn. He sat down to the game and begun a thorough think about each of the first moves. Coincidentally, Jauregui played a system which I also often employ. That deepened Bobby’s suspicion. He spent an hour and twenty minutes on the first 11 moves. He wanted to play out of theory and avoid possible surprises. And he managed that beyond all expectations: His move 25 cost him his queen and he could have safely resigned by the move 29.
One could speculate that it was his guilty conscience that cost him the point, and, with that, his chance for the first place in the tournament. …”
LINK