http://cappelle-chess.fr/fr2/default.php
It is difficult to describe what happened in my game today.  Mutual madness comes to mind.  First I was winning –easily it seemed to me–and then I walked into every trick that my opponent laid for me!  Then he was winning–for one move.  When time control was reached (move 40) it seemed as though a draw was the likely result–but White could try.  And he did…a fascinating game in many ways.  But to be honest, if I don’t play another game like today for the next few years then I will not miss it!
SPRAGGETT

TIKKANEN
I have recently taken up this line of the Kings Indian.  I have noticed that the Serbian GMs specialize in this line.  Black is very solid, especially where it counts: on the Queenside.  Unlike most lines in the Kings Indan, White has to work to get something going over there.
This pawn structure (c5-d6-e5) is how they used to play the Kings Indian in the 1950’s until the …Nc6 lines became all the rage.  I believe the line was abandoned for no good reason up until recently…
12.Ne1 Nh6 13.f3 Nf7 14.Nd3 Qe7 15.a3 Bd7 16.b4 b6

I suggest the readers to take a look at GM Damljanovic’s games in this line.  He has scored very impressively with the Black pieces.  Now probably White should maintain the tension on the Queenside with Qb3, like Kramnik did recently in a similar position.
17.bxc5 bxc5!

This is the correct way, even though it is at first illogical.  Black voluntarily keeps his Knight on a6.  When I first studied this opening system, I realized that the Knight on a6 performs many important functions: it prevents the sacrifice on c5; it protects the b8 square, allowing for Black to oppose Rooks should White double on the file; and should Black ever play Qa4 the vulnerable a-pawn is shielded.Simply trading off the Black Knight would facilitate White’s chances of penetrating on the Queenside.
That being said, I agree that the Knight is offside.  But (and this is important) Black has many other pieces on the board to do important work.  Chess is a dynamic game and one should learn that not all bad pieces are infact bad!
18.Rb1 Rfb8 19.Nb5 Bh6 20.Qa4 Bc8!

All according to plan!  White has also invested a lot of pieces on his Queenside play and they have run into an impasse.  In the meantime, I will angle for a timely …f5 to get some counterplay.  It is not a lot of counterplay, but sometimes a bit of counterplay is quite sufficient to maintain chances.
21.g4 Rb6 22.Kh1 Bd7 23.Be1?! Nc7 24.Ba5? Ra6

ONLY NOW DID I REALIZE THAT I WAS IN TROUBLE!

Material is about equal and White’s pawns are weak and easy to attack.  Ofcourse, my King is on the wrong side of the board and White has some chances of winning should he be able to manoeuvre his minor pieces to start checking my King.  But, I don’t think he can do it.  I was pretty confident that I had reasonable  chances to draw , provided I did not blunder (again!)
44…Qf4 45.Bd2 Qd4 46.Kf1 a5 47.Ke2 a4

Black’s a-pawn is an important source of counterplay.  In the end it saves me.  I could have avoided what now happens in the game, but I did not see too much wrong with my move
48.Rg5!? Kxg5 49.Nc2 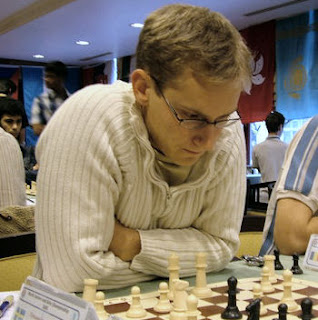