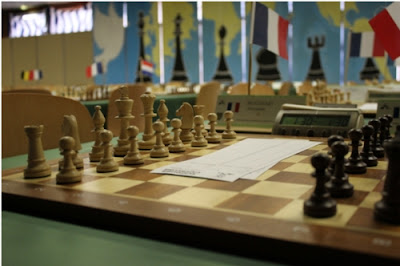 The first round took place Saturday afternoon amid pomp and ceremony.  The mayor showed up and there were the usual welcoming remarks and explanations of the rules (and translations there of)!  At 16:00 hours the clocks were started.
I was paired against the Swedish IM Samir Lejlic, a very nice fellow who doesn’t play much these days but who is always a tough adversary.  The opening was a Spanish, an opening that I enjoy playing and against which I have great results.
My opponent ‘tested’ my theoretical preparation by grabbing a pawn and then trying to hold on to it.  Unfortunately, White has lots of play and I managed to gain control of the game once I had doubled Rooks on the d-line.  At first I was unsure if I had more than compensation, but later analysis showed that Black has many difficulties.
When short of time my opponent under estimated me giving up my 2 Rooks for his Queen.  My Queen then gobbled up some pawns and that was the game.