The 2011  Canadian Zonal started yesterday in Guelph, Ontario with  29  eager participants .  The event is a 9 round swiss tournament  that ends next Wednesday.  Top seeded is GM Bator Sambuev (who is playing for the first time in a Canadian Championship).  The winner of the Zonal goes on to represent Canada at the World Cup to be held later this summer in Khanty Mansiysk (Siberia).

Top seeded GM Bator Sambuev is originally from Russia.  His current FIDE rating is 2513  He now plays for Canada, the details of his federation transfer are below

The time control of the Zonal is 90 minutes for the first 40 moves followed by 30 minutes for the rest of the game (plus 30-sec per move).  Although the tournament does not have its own website, MonRoi is carrying the games live (http://www.monroi.com/) and seems to be doing an excellent job, despite a shaky start.  Pairings, result and round by round classifications are also available at the site.
PLAYERS LIST 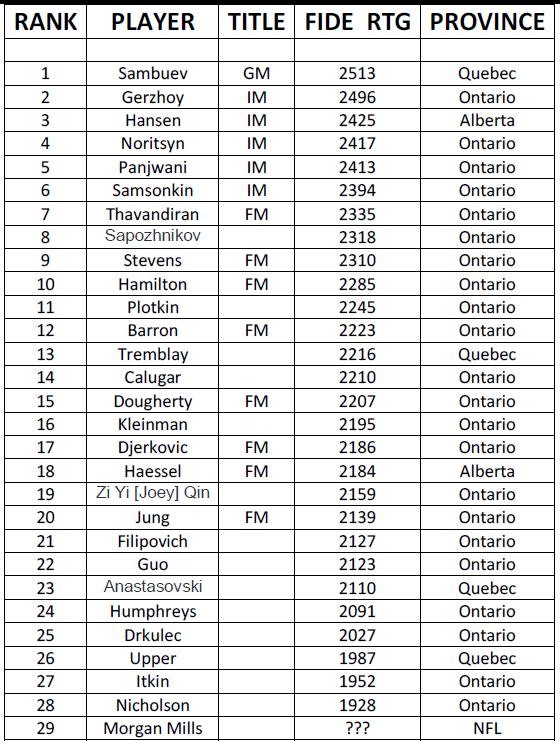 In recent years the CFC has designated the Canadian Championship a low-priority event and as a result the quality and strength of Canada’s premier event has dropped.  Unlike most Canadian Zonals before 2002, the CFC no longer budgets or contributes anything for the tournament (in the past, up to $6,000 was allocated for each Zonal, to help cover prizes, accomodation and organizers’ expenses).

Today the CFC tries to attract organizers with the high entry fee that it charges the players and by making the players pay their own accomodation; as an extra incentive, the organizer can take a large share of the entry fee for himself.  And if there is any sponsorship, the organizer usually now just pockets it (case in point was Hal Bond finding sponsorship of $25,000 for the Canadian Championship in 2007 –a non-zonal year–and the prizes were simply entry fees!)
The net result of this change of policy is that now the zonal organizers have become fat and lazy, rarely showing motivation or enthusiasm for their craft. Mediocrity reigns.  This year there are no sponsors;  no guaranteed prizes other than entry fees (which are based on a minimum of 30 paid-entries); no website or media-kit and neither has there been any promotion of the event to the general public.  However, in the organizers’ favour, a large contingent of eager players rated below 2200 FIDE (approximately half the tournament) have been enticed to play by an IM title that zonals offer to the best player scoring 66% or higher.

Another consequence  of this change of priorities, few of Canada’s elite players  want to participate in the national championships anymore.  As we can see from the list of Canada’s best players (FIDE-active at some time during the past 5 years), only 2 of Canada’s 10-highest FIDE-rated players have decided to play :

This writer has already expressed his disappointment at the CFC for neglecting Canada’s premier tournament, and you can see my earlier blogs on this topic.  I have nothing new to add here.  I wish all the players a very good tournament and may the best man win!

For those interested in more information about the Zonal, please visit the ChessTalk  message board.  The last time I checked, the CFC executive was bragging about its achievement in organizing a national championship at zero cost!  A lively exchange between former Canadian champion Jean Hebert (defending the interests of Canada’s best players) and members of the present CFC executive might also be worth checking into.
SPRAGGETT ON CHESS
Share