Between May 6 and May 11 the 2011 Canadian Chess Championship was held in Guelph. Twenty-nine players between 1950 and 2513 (FIDE), including 1-grandmaster and 5-international masters, braved the hastily organized 9-round in 6-days event. At stake was the right to represent the CFC at the World Cup to be held later this August in Siberia.
When the smoke cleared GM Bator Sambuev (Quebec) and IM Eric Hansen (Alberta) tied for 1st place with 7.5 points each. A short series of tie-break games was played to decide which would officially become the 2011 Champion. Bator Sambuev emerged victorious. Congratulations to both players!

IM Gerzhoy finished alone in 3rd place with 6.5 points, while Noritsyn, Panjwani and the 2210 rated Calugar finished with 6 points each. (I will have more to say about Calugar’s final game later)

GM Bator Sambuev (born Russia 1980) has been living for a number of years in Montreal and has earned a reputation for being an excellent weekend swiss player, easily dominating this circuit in Quebec and Ontario. This was Bator’s 1st appearance in a Canadian Championship, and hence his first national title. He will not, however, be representing Canada at the upcoming World Cup because of some technicality regarding changing federations (you either pay a 5,000 euro fee or have to wait a one year grace period). In his place will be Eric Hansen. Sambuev will be able to represent Canada starting sometime this October.
Sambuev played every game to win, but could not always score, making 3 draws. He was a bit lucky at times, but you make your own luck.  Bator’s win against Samsonkin was perhaps his best effort. White grabbed a hot pawn (d5)  and was never given a chance to recover. Sambuev played with great energy.
POSITION AFTER WHITE’S 20th MOVE:
GM  SAMBUEV

www.monroi.com
As explained in previous blog articles, this year’s Canadian Championship was a low-priority for the CFC executive. Each participant (with the exception of the single GM who participated) had to pay a $250 entry fee. There were no cash prizes other than a percentage of the collected entry fees that were returned after deducting for some organizational costs. 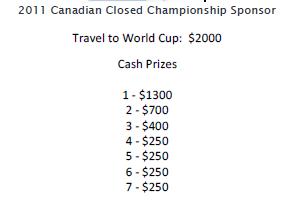 There were no sponsors, though the organizers liked to pretend that  there were sponsors–listing the CFC and several other penniless and near-bankrupt Ontario chess associations as ”official” sponsors. SAP also found its name attached to the event, apparently without them the much criticized MONROI (live coverage) would have been impossible (if we are to believe what we read). I doubt if SAP will be pleased with the publicity…

International coverage of the Championship was virtually non-existent, though some short videos were put on youtube in the final days . There was no easy access to what was happening day by day other than thru the Monroi website. It was hard (re: impossible) to find the pgn-format games in any single place , and following the games-live-was often an exercise in frustration. No insult intended, but it is clear that the MONROI people need to fix some bugs in their system.
____________________________________________________________________
I followed closely the players’ progress thru the tournament, especially as I was interested in how Canada’s young talents are developing. In particular, I was very impressed with IMs Eric Hansen and Raja Panjwani. Both players take their chess very seriously and have tremendous fighting spirt. They are fearless. To my mind both youngsters are already GM-calibre. GM Sambuev had to play very well to achieve draws against them!

IM Eric Hansen (born 1992) is from Calgary and is the best player ever from Alberta. He just recently won the Alberta Championship and this result in Guelph establishes him as one of Canada’s most promising hopes. Eric should have qualified for the Canadian National Team last year, but was replaced by a Toronto player in an controversial and possibly illegal decision by an all-Toronto Selection Committee! This result at the 2011 Championship, where Eric finished ahead of 3-Toronto members of last year’s National Team, must come with a lot of satisfaction. Well done, Eric! 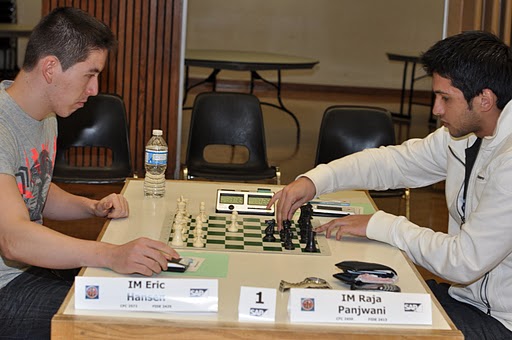 Eric won the critical 8th-round game against Raja Panjwani that allowed him to go the final round tied for 1st place with Sambuev. White managed to catch his opponent with a well prepared opening and, despite Raja’s stiff resistance and resourceful tactical play, Eric was able to push home his advantage, and with class. One of the most important games of this year’s championship.
[Event “2011 Canadian Closed”]
[Site “Guelph”]
[Date “2011.05.10”]
[Round “8”]
[White “Hansen, Eric”]
[Black “Panjwani, Raja”]
[Result “1-0”]
[WhiteTitle “IM”]
[BlackTitle “IM”]
[Source “MonRoi”]

IM Raja Panjwani (born 1990) represented Canada at last year’s World Junior and narrowly missed a GM norm. A physics and philosophy major, this talented youngster intends to study medicine in the near future. Raja does not have a lot of time to  play or study chess because of his busy university schedule, but what he lacks in time he more than makes up with in love for the game, discipline and dedication. Raja is what I call a serious student of the game!
Raja was one of the favourites to win this tournament but his 8th round loss to Hansen was a heartbreaker. Never the less, Raja played many wonderful fighting games in Guelph, his last round against IM Gerzhoy being just one of them! Enjoy. 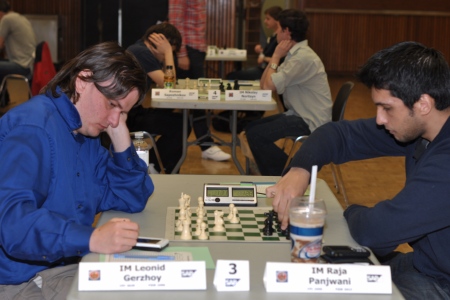 White is threatening to bust Black on the Queenside, but Raja finds a creative resource to save the game.
23…Nxh2!!
The White King suddenly finds himself facing a blitz! He must play carefully not to lose…

Now Black has nothing better than a perpetual check, which Raja obtained with
27…RxB-ch!

Raja Panjwani’s favourite game was his 6th round win over Victor Plotkin.
POTKIN

PANJWANI
At first sight it is not obvious what is going on here as both sides are struggling to mobilize their passed pawns.  However, Raja’s next move is a brilliant tactical  resource that soon makes clear that White is infact much better in the position in the diagram.
38.Nxb7!!

A popular line of the Advanced French…normal now is 10.Be2 or 10. Ra2 (Sveshnikov’s choice).  The  books write that White should not hurry to move his Knight (10.Nc3).  However, Noritsyn must have been day-dreaming as he played

Curiously, many players fall into this trap!  Should White now recapture the Knight then Black will take back with the Bishop and gain a significant advantage with the pin.  There would be little to prevent Black from playing …Rc8 followed by Castling and brining in the other Rook to bear on c3.
Noritsyn wisely chose not to recapture but instead continued with his development , as though nothing had happened!  He later put up enormous resistance and managed to fight back into a messy and probably equal game….then it was Sambuev’s turn to return the favour and blunder:
POSITION AFTER WHITE’S 46th MOVE (46.Rb-b3):

Sambuev had sacrificed an exchange in the middlegame but it had not yielded the desired results…White’s pieces are all coordinated and defend against Black’s immediate threats.  It is now time for Black to think of forcing a draw, and the experts tell us that 46…Qc2! was the right move.  White would be obliged to play 47.Nxf4 and the game would soon end in a draw by force.

Instead, amazingly, Sambuev still thought of trying to win and in the process he overlooked that White actually has a threat in the position above!  THE GAME CONTINUED:

Here Sambuev thought for a long time  as he began to realize the full extent of the damage caused by his last move.  Quite simply, he is lost!  He found nothing better than 47…Qf5 but after 48.RxB!  QxR 49.RxN he is a piece down and his King finds itself in an even worse position than White’s King…
But the comedy was not over yet!  Just when it seemed that Noritsyn was well on his way to win the game, he makes an incredible halucination:

Correct is the simple 58.Qf4.  Instead  Noritsyn thought he saw an even faster way to win:

No doubt Noritsyn had now planned to mate in 2 moves with 59.Nh5-ch!!!  QxN  60.Qf6-mate!  But now it suddenly dawned on him that his Knight is pinned!  Quite simply, White now loses a whole Rook and with it the game!

(When is it better to lose than to draw?)
The last round game between the middle-aged Viktor Potkin (rated 2245 FIDE) and the teenager  Arthur Calugar  (rated 2210 FIDE) was one of the last games to finish and was decisive for determining who would get the IM-title and the 2 FM-titles that are by custom awarded at FIDE zonals.
Calugar had 5 points going into the game and a win would most probably mean that he would earn the IM-title (6/9 by FIDE regulations).  Potkin, being a half point behind at 4.5 points had no chance for the IM-title even if he won, but a win would assure one of the FM-titles.  A draw was useless to Potkin since in that case Calugar would get the FM-title before him!
So Potkin was playing the game  for a win and as things happened soon out of the opening he had a superior position.  But Calugar put up strong resistance and managed to slowly reduce his opponent’s winning chances.  By move 53 it looked like the game should end in a draw….
POSITION AFTER WHITE’S 52nd MOVE:
CALUGAR

Here Calugar can win a pawn with 52…Qxh2, but after 53.Qc5! Qxg3  54.Qxa7-ch  Qc7 55.Qa8! (with considerable counterplay, threatening to play the Queen over to the Kingside attacking the vulnerable Black pawns; and threatening to advance his own a-pawn) the most reasonable result seems like a draw.  Calugar decided to prepare taking the h-pawn with 52…h5!?

It has been clear for a while now  that White can has no winning chances at all and that a draw is the evident conclusion to what has otherwise been a tough struggle for both players.    The position has already been repeated twice and White can now force a 3-fold repetition with another round of checks starting with 59.Qb8-ch.

However, by this time almost all of the other games had  finished  and since it was known that the first FM-title would go to Kleinman, the rest was easy to calculate.  Curiously,  a  very unique set of circumstances suddenly arose :
Faced with these very exceptional circumstances, Potkin all of a sudden found himself  with the very  pleasant option where he can forgo the logical and seemingly forced repetition of position and play on without risk of losing SINCE A LOSS WOULD BE JUST AS GOOD AS A WIN as far as earning the FM-title is concerned!!!!!

When I first played over this game, I found it difficult to understand White’s refusal to take the draw here (and later, on several occasions , as we shall see) and to play for a win when this seemed not only improbable but also much too risky!  And to do so especially when it meant that such sloppy play would reward the opponent with an IM-title  (such disrespect for the IM-title!) However, it was only later that an eye-witness explained the real situation that Potkin  now faced


Instead,  once more not interested in saving the game, Potkin played the incredibly reckless (surprise, surprise) move 61. Qxh5?  This allowed Black to seize the initiative and the advantage for the rest of the game by the obvious  61…Qa1-ch  62.Qb4  Qxd4-ch  etc.  The White Queen was not able to return in time to save the White monarch.
The final result is that Potkin lost and got his FM-title (it turned out to be unnecessary to have a play-off), while Calugar got his IM-title.  The outrage is that Potkin was able to get his title by losing; drawing would not have been good enough!!
Ok, clearly Calugar had nothing to do with this, but in my day both players would have been forfeited.  Such a disgraceful finish to an otherwise normal game should never be rewarded. 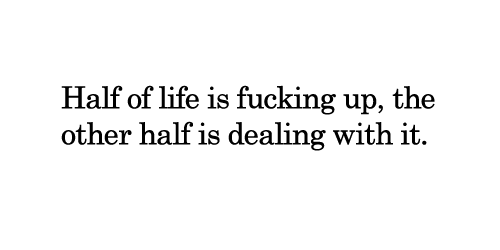