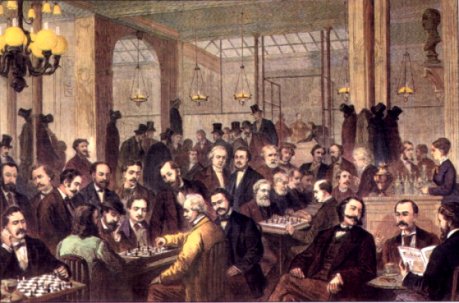 The famed Cafe de la Regence (Paris, France) opened in the year 1670 and for almost 2 centuries was the centre of the chess world.  Not only did some of the most famous names in chess history visit the club (mostly trying to make money in small pot matches) such as Philidor, Morphy and Steinitz, but many of the most important people of their times were also regulars:  Napoleon, Voltaire, Rousseau and Robspierre.  If that is not enough to impress you, then consider this: Karl Marx met Frederich Engels in the club on August 18, 1844 !

If you are interested in learning more, there is even a blog dedicated to the now extinct club:
http://lecafedelaregence.blogspot.com/
ENJOY!
Share