His chess is certainly not outclassing his opponents, but his fighting spirit and willingness to play to the bare Kings is paying big dividends!  Today Alexander managed to win a delicate ending when Alekseev made a slight –and almost impreceptible –error with his Knight.  It was nerve racking finish….NOW it is unlikely that anyone can stop the Russian grandmaster from registering one of the most impressive tournament results of the past few years! 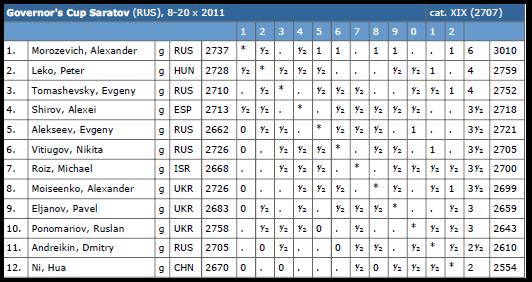 gm MOROZEVICH
It has been a hard fought game so far, pretty balanced over all.  Now we have a horse race, with White running his pawns up the Q-side and Black on the other side.  Both Kings are relatively useless here, and the most important factor is probably the clock.  At this point probably both players were relying on the 30’second increments, making precise calculation virtually out of the question.  I think it is clear that if Black gets his Knight back in time he should be able to sacrifice it for the 2 pawns.
A little consulting with a chess engine indicates that Black can draw with 55…Ne3! and after the most logical continuation 56.a5  f2!  57.Rf6-ch (57.Nxf2  Nc4 should do it) 57…Ke7 58.a6  Nd5! 59. Rxf2  Nc7! etc
HOWEVER, Alekseev must have thought that 55…Ne5? amounted to same thing.  He was wrong:  after 56.a5 he only then realized that 56…f2 loses to 57.Rf6-ch Ke7  58.a6! and the Knight can not sacrifice itself for the Pawns!
That left only 56…Nc4 57.Rf6-ch Ke7 58.a6 Na5 (what else?) 59.Rb6! Kd7 60.a7  and Black can no longer offer any meaningful resistance (1-0)
THE CLOCK DOES IT AGAIN!

Yasser today took the lead in the tournament scoring his second win in 3 games.  However, it was hardly a clean win;  Yasser played in the style of the great champion Lasker: an inferior opening, hoping to either confuse his opponent or make him over confident.

Neither happened, and from my seat I could see that Yasser had some 2nd thoughts about his opening chess.  However, Oms got into time trouble and let slip his advantageous position.  The final insult was overlooking everything , including the final mating theme!
gm  SEIRAWAN

I think the worse has passed for Black and White’s edge should be small after the logical 27…Bh6, trying to encourage White to exchange his dark square Bishop.  The passed h-pawn is easy enough to control… HOWEVER, it is clear that Black would never win!  So Yasser, drawing upon his years of experience in playing in US swiss tournaments, plays a bit of poker:
27… a3!?  28.b3?!
(This does not lose, but 28.h5! would press Black and make him work to hold the position)

The final blunder. Analysis shows that the cold blooded 30.b4 would still be good enough to hold.