gm  CARUANA
This game was played yesterday in the Karpov International (Poikovsky).  The above position is pretty balanced and nothing much is happening.  White has hopes (dreams) of doing something down the h-file, but simply 36…Rh6!?  is good enough to snuff out that: after 37.Qf3  Qg6 38.Rxh6 gxh6 is there anything for either to play for?
INSTEAD, Rublevsky felt he could do better to ‘kill’ the position with 36…Be6?! . But this was based on a miscalculation.  The game continued 37.Bxa6!  Bxb3 (?–but this is Rublevsky’s whole idea behind his 36th move).
WHITE TO PLAY AND WIN!

gm  MOTYLEV
It has been a hard fought game up to Black’s last move (28…Bd4?) and this gives White the chance he was waiting for to break into Black’s compromised K-position:
29.Bxg6!  PxB  30.Rxg6  Qh7 (…Bxf6 is a bit better but would not save Black) 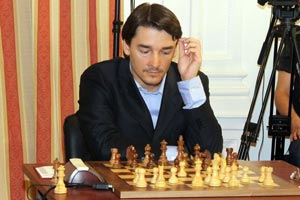 It seems that nobody can stop Morozevich at the Governor’s Cup and he leads a strong field by a whole point after just 4 rounds.  He has won his last 2 games (both with the Black pieces!), though today’s effort featured a considerable element of luck when first Morozevich and then Ni Hua overlooked a strong finesse (zwischenzug) that could have won the game in short order! 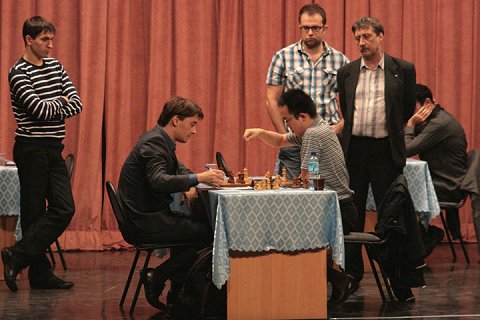 Here Morozevich  should  go thru with his originally intended 21… Bxg4!? 22. Rxg4 Nxg4 23. Qxg4 , where we have an unbalanced position very similar to what later actually happened later in the game.  The 2 minor pieces are somewhat better than the Rook and Pawn, but no more than that; it would still be a tough fight for both players.
INSTEAD, Morozevich played weaker:

And we now have a very similar position to the one described above in the note after White’s 21st move.  The game is just beginning…later errors cost the Chinese star the game.