CLASSIC ATTACKING SHOT
The following game was played in the 8th round of the Karpov International (Polkovsky) between 2 Ukraine GMs:  Karjakin and Efimenko.  It features a really neat attacking idea that you will find amusing.
The 10-player tournament finished today and saw 2 players tie for first:  the French GM Bacrot and Karjakin, both scoring 5.5 points.  The Italian Caruana was half a point behind.  Very little memorable chess was seen in the tournament, marked by a large number of draws; no player won more than 2 games.

An interesting fight for the initiative is taking place.   If White wants to make the most of his pin on f6, then he can not afford to lose a tempo safeguarding his K-Bishop (12.Bc2?! h6!)  As Fischer  pointed out, chess is often all about timing.  The next moves seem reasonable, but probably Black’s 13th move is a tad too ambitious and the origin of subsequent difficulties.
12. Qf3! Nxb3 13. ab Bc7?! 14. Nf5!

Black must take the Knight off  (14…Bxf5!) but was worried about the annoying pin and the Knight coming into e4 after 15.exf5!.  Probably he did not like 15…Qd6!?, which keeps Black in the fight…INSTEAD, he jumps from the pan into the fire, overlooking a really cool shot:
14… Qe6?  Looks ok at first sight,but…

A really fine move that denies Black any chances!  The game continued:

The Governor’s Cup in  Saratov is beginning to look like the long awaited comeback of the Morozevich that we have all come to admire and love a few years back!  After 6 rounds he has 5 points, a full point and a half ahead of the field… 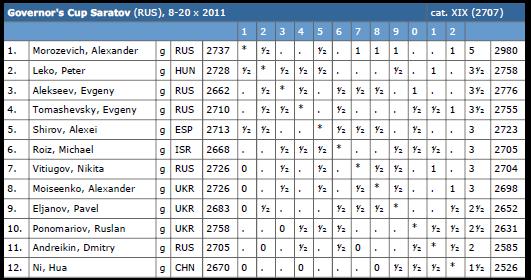 Morozevich’s win against super-gm Eljanov was one of his best efforts so far this year.  A powerful performance combining a very hi-level of positional manoeuvres and astute tactics.  The game features a nice lesson on how to exploit an offside Bishop…
POSITION AFTER 10 MOVES:

gm  Morozevich
In many games in positions similar to this White often simply takes the Bishop on b6 and then tries to prove that his Bishop pair is worth something…IN THIS GAME Morozevich gives a completely different interpretation and approach: he first ignores and then buries the Bishop!
11. Bg5!? f6 12. Bh4 Be6 13. Qc2 Qd7 14. Rad1 Ng6 15. Bg3 Qf7 16. b3! Rae8 17. c4! c5

And there you have it!  Without really wanting to , Eljanov has drifted into an inferior position and the only question is whether that Bishop on b6 will ever live better than a pawn…Morozevich gave a masterful answer to this in the game continuation.  Take a look at it and learn!  A beautiful performance by a player who many feel is capable of one day winning the World Championship…
[Event “Governor’s Cup”]
[Site “Saratov RUS”]
[Date “2011.10.12”]
[Round “5”]
[White “Morozevich,A”]
[Black “Eljanov,P”]
[Result “1-0”]
[Eco “C45”]
[Annotator “”]
[Source “”]