The 4th round saw Bulgaria pull off a great upset against pre-event favourites Russia, 3-1, with no draws!

While former world champion V.Topalov said afterwards in an interview (below) ”We were lucky…” , I think a closer look at the games reveals that Bulgaria was more lucky to be strong rather than lucky at luck!  All 4 games were hard fought and very interesting affairs.  Bulgaria got off to a good start and seemed to be heading to a match win…regardless of whether Topalov would have won or drawn. 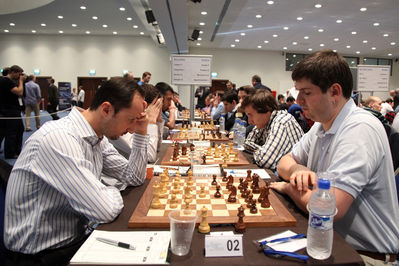 The Topalov encounter with the current Russian champion Peter Svidler no doubt will go down as one of the great match ups in this team event.  The game featured a topical Spanish Opening, an opening that both sides are experts at.  It became evident early on that a tense, complex struggle was about to ensue when the Bulgarian superstar played his 10th move:
10.a3!?
GM  SVIDLER

GM TOPALOV
White indicates his intention to withdraw his Bishop to a2 (keeping the a2 to f7 diagonal under watch) instead of the routine 10.c3, allowing for the withdrawal of the Bishop to the customary c2 square.  In recent times White has not had much success retreating to c2.
By move 20 a critical position had arisen:

With only one pawn exchanged so far, the position could explode at any moment.  I prefer this kind of position with the White pieces, where guerrilla tactics often take the prominent role in the course of play.  Here White can virtually repeat the position with 21.Nh4 Qh5! 22.Nf3 Qg6!.  However, as Topalov mentioned in the post-game interview, since his team mates had good positions at this point, he felt confident about playing a bit loose:
21.g4!?

INSTEAD, Topalov played the less precise (but much more complicated) 23.Nf5 and the game seemed to swing back and forth in no-where land until the following position was reached after White’s 27th move:

White is attacking f7.  Black should now play the cold blooded  27… Rf8! when if  28. Nf5 Nxf5! 29. gf Rd6! 30. Be3  g6! 31. Bxb6 Rxb6 32. Rad1 gf  Black is keeping his head out of the water and the game is completely wild with chances for both sides.
INSTEAD, Svidler played indecisively with 27…g6?! and after the energetic 28. g5! Rd6?! 29. gh!  the Bulgarian superstar started to dominate the play, maintaining a grip on the position.
Everything seemed to indicate that Topalov had good chances for victory when time control was reached at move 40:
POSITION AT MOVE 40 :

After such a tense and complicated fight it is difficult to change gear and play computer-perfect techical chess!  Here 41.Qd5! is a finesse that must have escaped Topalov.  After 41… Qxd5  (41…Kh7 42.Qxd6 is hard to meet)  42. ed Rc8 (42…Ra8  43.Ra5!)  43. Rxa6 Rxc3 44. Rxd6 White will probably win without much problem…
HOWEVER, Topalov played the imprecise 41.Qxb5 (?!) which ALMOST gave the Russian champ chances to crawl back into the game.  The critical position would arise after White’s 52nd move:
DID SVIDLER MISS A DRAW? 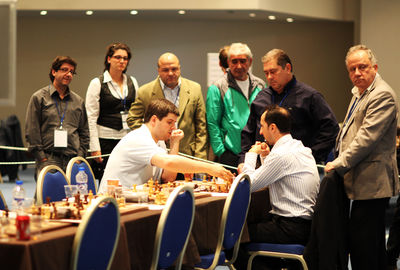