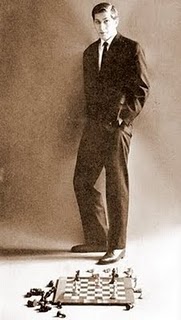 Today, January 17, we mark the 8th  anniversary of the death of the greatest chess player that has ever walked the earth. (What follows was originally published on my blog on January 17, 2009. I feel that it is worth re-publishing even today) That is high praise, and only a truly worthy champion can be put ahead of such magnificent giants the chess world has produced: Philidor, Staunton, Morphy, Steinitz, Lasker, Capablanca, Rubinstein, Alekhine, Botvinnik, Smyslov, Tal, Petrosian, Spassky, Keres, Karpov and Kasparov. Exalted company.

Bobby Fischer was also the most photographed player of modern times. On the internet literally thousands of photos have been archived. A google search reveals millions of hits. He was the most exciting player the game has seen since Morphy. People who have met him often use the word ‘electrifying’ to describe his presence when he walked into a room.

His games , ever since a young lad, attracted multitudes of spectators and admirers. Superstar magnetism.

No chessplayer that I have ever heard of has received mail from hundreds of female fans , many with marriage proposals! Bobby Fischer was idolized around the world ever since he burst on to the scene at the age of 13. 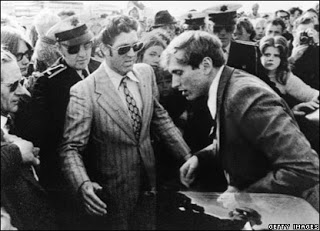 A mega star almost all of his life

Fischer, just a boy, arriving for his first European tournament

Fischer became the youngest US champion at the age of 14. At 15 he was already an elite grandmaster and candidate for the highest title in the chess world. But he had to deal with reality: the cold war was raging and the Soviet political leaders especially refused to allow an American (no matter how talented) threaten their national game. Much talk of collusion between Fischer’s Soviet opponents to try to stop him , of the KGB stalking Fischer all of his career and of a FIDE world championship structure deliberately designed to thwart any threat to the Soviets coloured Fischer’s long march to become the 11th World Champion. Much has been proven to be true since secret documents have been made public recently.

Fischer’s genius apart, Bobby was a normal American like any other. A decent person. Likeable and charitable. Even the Soviet superstars found his boyish charm disarming. (photo, below)

Fischer visiting Tal in the hospital in 1962

Fischer, Tal, Polugaevsky and Spassky analyzing in Havana 1966. He was respected and admired by all 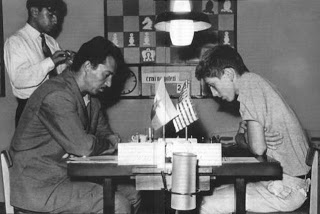 Fischer playing the Serbian legend S.Gligoric. Curiously, Gligoric had a very good score against Bobby before 1965.

Fischer playing the reigning World Champion, Botvinnik, in 1962. Botvinnik managed to draw a lost game, but came away immensely impressed by the talented American

When the Soviet authorities caught a glimpse of Botvinnik’s positive comments about the talented American, they understood that there was an ideological contradiction in the works. So soon afterwards, Botvinnik was more careful in his remarks, and rarely let any Fischer success go unpunished: either his opponents were ‘sick’ or Bobby ‘lucky’, or Fischer won only because of his fabulous memory and once he turned 30 he would go downhill quickly ! Botvinnik knew that there was no point in fighting the politicians…

When Fischer briefly withdrew from competition because of ‘Soviet cheating’ in the early 60’s, he toured the US and Canada , giving simuls and lectures. I remember when he came to Montreal : I was not playing chess at the time, but Fischer appeared on TV playing a blitz game with Lazlo Witt. (Witt won!)

From a discussion I had with Zvonko Vranesic (who attended a Fischer lecture in Toronto), Bobby’s lectures were filled with profound thoughts and ideas. One of them was that the Queen’s real prowess could only be realized by drawing upon her the firepower of the enemy, and just when it seems she is about to be captured…she uses her power to jump to the other side of the board!

Ofcourse Bobby could be a difficult person. Fischer developed an ego to go along with his superstar status. He demanded the best conditions from organizers. He walked out if something was not perfect. He represented something that was the beginning of the professionalization of chess.

In 1967 , the US chess federation received an invitation from the Prince of Monaco for three American chess players to play in the Monaco Internation Chess Tournament….but with the condition that one of those three player must be Fischer. Fischer participated and won the tournament, but proved to be a bit difficult. The following year, the US chess federation received another invitation from the Prince for 3 players to participate in the tournament, but with the condition that NONE of the players be Fischer!

Fischer disappeared from international competition for about 18 months in the late 60’s, making a comeback in the spring of 1970. Shortly before this, he authored a best selling book of his games. I remember this period very well since I had just recently started getting involved in school tournaments in Montreal and the excitement that Fischer generated in the chess community was palpable! I have never seen anything like it since: he was a god to chess amateurs! The living legend had descended from the clouds to settle business with the Soviets… 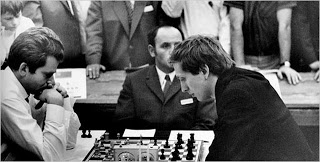 Bobby won everything he played in in 1970, and he played a lot! His games were amazing. If Mozart was a chessplayer, then he surely would be Fischer. Bobby was quickly nearing his peak. It was especially for this reason that there was unparalleled interest when he met Fischer at the Siegen Olympiad. (Spassky won!)

Then in 1971 began Fischer’s run up to Mount Olympus. 6-0 scores against both Tajmanov and Larsen. Nobody could believe it! The American media started to take notice. The Soviets’ attempts at thwarting the American genius were doomed: Fischer had pressured FIDE to put in place a qualification structure where collusion and cheating were next to impossible.

Larsen complained of high blood pressure during his match, and had to be hospitalized for a brief time. But his defeat was deserved! I think it was the great S.Tartakower who said that in all of his life he had never beaten a truly healthy opponent!

When Fischer met the Armenian grandmaster and former World Champion Tigran Petrosian in Buenos Aires in late 1971, thousands of spectators showed up every game. There was pandomonium in the streets! Hundreds of journalists from all over the world flew into the Argentine capital to watch history unfold. 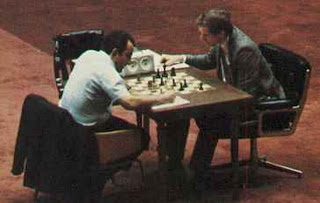 If you are attentive, then you will have noticed that Fischer at the board always leaned forward. And what a great match it was ! Fischer won the first game. Petrosian the second. After 5 games, the match stood even. But then Fischer won 4 games in a row!! Petrosian had never lost 4 games in a row in his whole life…he also called the doctors! But what could medicine do against historical destiny? 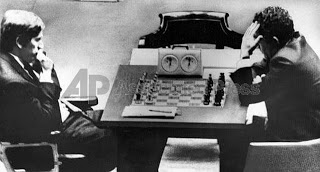 Fischer in the final game of the match. He had just played his king pawn forward,and Petrosian was on the move. He looked worried. Undoubtedly he was more concerned about how the Soviet authorities would react when he returned home than on trying to win the game. He was a defeated man. Fischer had earned the right to play for the World Championship!!

When I was in Buenos Aires in August/September 2005, I made a point to visit the theatre where the Fischer – Petrosian match was held. It had little changed since then! I was reminded of the photos published in magazines showing thousands of spectators crowding the street infront of the theatre…curiously the theatre is only 5 minutes walk from the location of the famous Capablanca vs Alekhine match of 1927!

And we all know how history turned out. Spassky saved his honour, but could not stop what had been destined by the gods.

It is known that in the run up to the 1972 negotiations for the Fischer-Spassky match there were grave obstacles that had to be overcome. Fischer wanted more prize money. The Soviets refused to give an inch in the negotiations. Fischer more than once backed away. But the world in 1972 was still at the height of the Cold War, ‘detente’ was being constructed, and it was important for both the Americans and the Soviets that the match be held. In the end, high level politicians saved the day: Henry Kissinger had to phone Bobby to convince the American genius to go to Iceland. Fischer was a patriot.

In 1975 the much anticipated Karpov vs Fischer match never took place, even though a 5 million dollar prize fund was fully guaranteed, and Fischer never played again until 1992 (and then just as quickly disappeared). I suppose any good story of the life of a rebel genius must end in tragedy! The gods need reasons to cry. I believe that it was for political reasons that the 1972 match was saved by the White House, and that by the time 1975 came around the world was already a very different place. Nixon had been forced out of the White House the previous summer. Helinski was already done, the Viet Nam war was over and chess/Fischer was simply no longer a priority. Fischer was already a lving legend, and had nothing to gain. He had won the World Championship, chess was popular and booming, and we should not let escape that the chess politicians in FIDE saw little to be gained by having Fischer risk losing his title to a Russian… today it is every chessplayer who is nostalgic of those times and all wish they could turn back the clock and re-write the fateful decisions made. 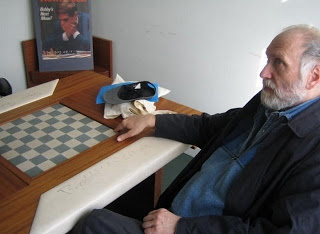 Sitting by the original board from the historic 1972 match 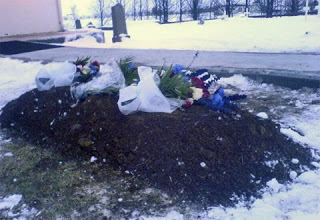 Fischer has found peace in Iceland

What does Bobby Fischer mean to me personally? I never met him, but as a chessplayer he represents something that is bigger than the game itself. Chess , the game, can never have a very big appeal (compared to poker or tennis or soccer) by itself. It is , after all, a very difficult game that requires hard work and dedication. It requires an unusual combination of passion and craziness to be a chess fan.

Undoubtedly, in my lifetime, Bobby Fischer will have been the only individual to have made chess universally appealing. And probably will be the only one to do so in all of human history.

What was it that made Fischer great? What was it that made him a living legend, and now that he is dead…will he become the ‘Elvis Presley’ of the chess culture? I am not sure, but I think that we must remember that Fischer was only too human. He had to deal with the pressures of superstardom alone. He had no real family, and few friends. He was a fragile human being.

Even after his death, Bobby generates controversy and intrigue.  His estate is being fought over by his american family, as well as by his wife and a woman claiming to have his child!

And like every true genius, there must some element of tragedy, something that makes us feel sad within when the story is complete. Is the tragedy of Bobby Fischer that he never played again after winning the World Championship, or is the tragedy about his final years in disgrace (before finding a friendly haven in Iceland)? I don’t know, and your answer is as good as mine.

In all of my years as a chessplayer (fan), I have to say that I have never seen anything like the fever that Bobby Fischer created. Chess is supposed to be dull! Bobby generated excitement and controversy. The champions that came later (Kasparov, Karpov, Kramnik , Anand, etc) had the misfortune to have to measure themselves against Fischer. And since Fischer had disappeared, he was untouchable. Unbeatable. Try as they may (especially Kasparov), there will only be one Bobby Fischer in the history books long after they are gone.

I am truely thankful to bear witness to Fischer’s great achievements. Thankyou, Bobby!