It is the final Monday of the month!  Time goes by so fast…not so long ago it was just the beginning of a new and crisp year and already it is spring.  I should be playing in San Sebastian in the middle of next month (Korchnoi is guest of honour, and fellow Montrealer Leon Piasetski should be playing also).  Apart from team and coaching commitments, I will also play in Metz.  This summer will be quite busy, and with a bit of luck I will play 100 rated games this year.
One of my favourite sites is Winter’s Chesshistory.  I recommend this site for history buffs!   I checked out the current column (as I do every Monday) and –never disappointed–I found some interesting tidbits.  The first is a photo-group taken from an old 1939 Chess Review issue.  It shows some of the action at the New York State Championship.

What makes the photo-group so special is that former World Champion Em. Lasker was present on that particular day.  Can you recognize him?  Also a young Arnold Denker and a spritely Kashdan. 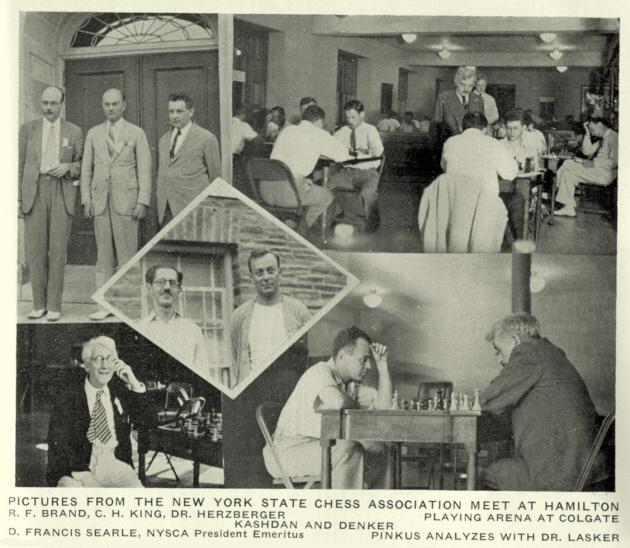 It never ceases to amaze me how much of Bobby Fischer’s life is actually documented!  In early 1957 Bobby was still a virtual unknown, and could hardly be considered even a strong player at that time (though he did show signs of occasional brilliance).  Bobby Fischer would only become a really strong player later in the year! (Winning the US open, the US Junior and the 57/58 US zonal)
Notice that the prize fund was $100, to be divided 65-35 between winner and loser.  Fischer lost the match 1.5–0.5, getting crushed in 20 moves in the first and Euwe giving a draw in the final game in a theoretical position. 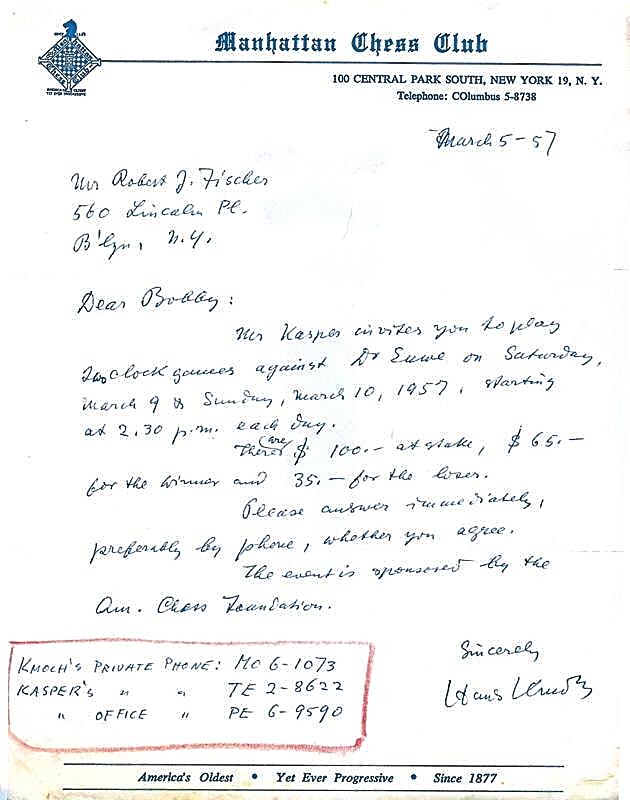 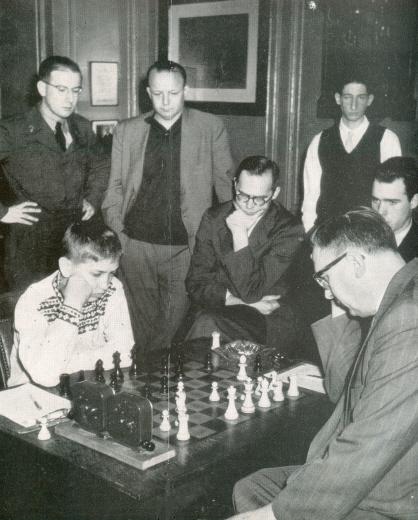 First game.  This photo appeared on the cover of Chess Review in April 1957.

Dr. Fedir Bohatirchuk emigrated to Canada after the II World War
Born 14th November 1892 in Kiev, Ukraine and died in Ottawa on 4th September 1984, Dr. Bohatirchuk was one of the most enigmatic chess figures of the tumultuous years of  revolutionary USSR.  By today’s standards he should  probably be considered of super-gm potential,  having defeated future World Champion Botvinnik on no less than 3 occasions.


Bohatirchuk soon fell into disgrace and fled the Soviet Union, eventually settling in Ottawa.  The USSR tried very hard to make him disappear,all traces of his official tournament records in the USSR were erased He played in 3 Canadian Championships and participated on the National Team at the Amsterdam Olympiad in 1954.  During these years his supporters tried to help him get the recognition for his past successes that he deserved, but the cold war politics in place worked against him.  He was consistantly denied the GM title that was given to weaker players…
Just this week the Russian site ”Chess Pro” did a long article on the Bohatirchuk controversy, complete with great photos and even some letters.  Unfortunately, I don’t read or understand Russian, so I can not translate most of what is said.  However, don’t let this discourage you to take a look at the above link. 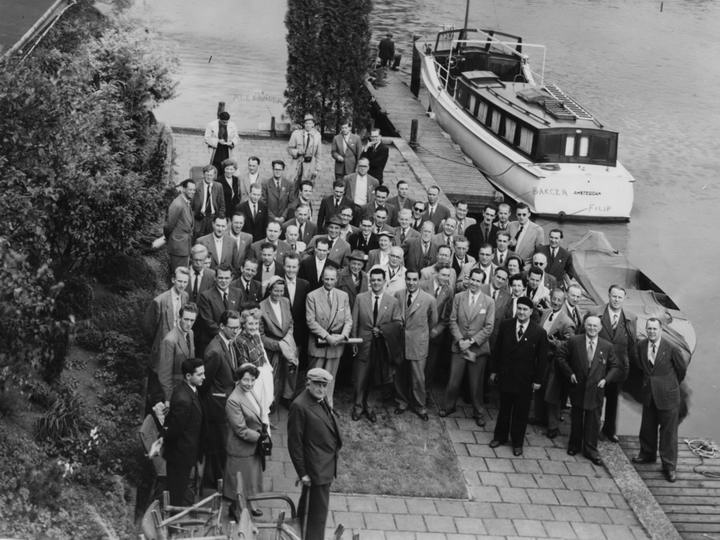 1954  Amsterdam Olympiad  (All of the participants) 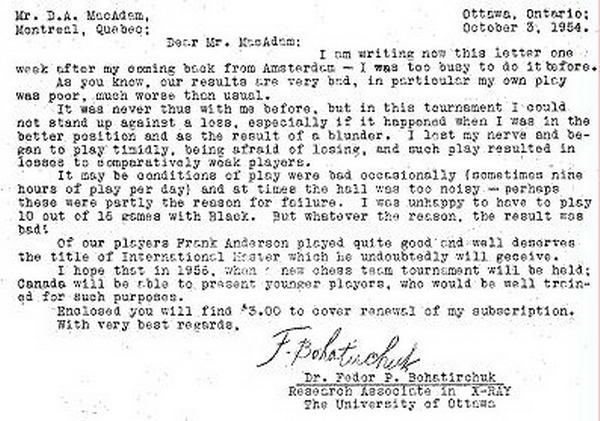 Chessbase reports this morning that ECU president Silvio Danailov is trying to pass some pretty dramatic changes to how things are run in European tournaments at tomorrow’s special meeting of the ECU held during the European Individual Championship.

Danailov was elected (somehow) to the ECU presidency last year and has a 4-year term.  I wrote on this blog at the time that such a strong-headed individual as president of a large federation was a tricky thing since Danailov’s personal history is chequered with controversy and scandal.  He is hardly the type of person to build stability in any organization.

Apparently he wants to introduce into all ECU events the Sofia Rules and the Bilbao Rules, as well as introduce a dress code and to start copyrighting chess games!  And the Turkish Chess Federation has threatened to sue should Danailov get his way…the president Ali Yaczi claims that the delegates are not being given enough time to consider and debate the changes.
The Sofia Rules are not such a bad idea, in my opinion, as they help to solve the problem of grandmaster draws.  However, the Bilbao Rules are just shock therapy: the idea of making a win worth more than 1 point will do havoc to rating calculations and encourage the buying and selling of points.  They may work well when the players are all receiving 5-digit honorariums (like at the Bilbao tournament, for instance), but in the typical European open with 30 or 40 gms playing for very few decent prizes, it just becomes an invitation for the less ethical amongst us to throw games.  Cheating is already a big problem in chess (there is NO drug problem in chess!) and to simply encourage it is the wrong approach.  Cheating is fundamentally an economic issue; in chess tournaments with few decent prizes a hard fought game in the last round ending in a draw just knocks out both players from the prizes.
I can live with the dress code, though I have not seen the wording of the proposed legislation.  But the copyright  proposal is premature, at best, and not thought out.  As Yaczi argues in his letter that appears on Chessbase, it is impossible to enforce and it will just have the effect of reducing the number of newspapers that give chess results and games.
Besides, the correct approach is first to go to the european courts and argue the case for games’ copyright.  Should the courts decide in your favour, then you have a valid argument.  Instead, especially with the internet, how do you control copyright?  Is the ECU going to spend millions of dollars that it does not have by going after individuals or newspapers to try to recover peanuts?
In anycase, this promises to be an interesting week at the European Championship in France!  As Yaczi has pointed out, since Danailov has become president of the ECU no sponsors have come forward to work with him.  Stay tuned for all the dirt!
_________________________________________________________
HOW MUCH LONGER CAN WE  HOLD OUR BREATH?

Finally, I wrote on this blog last week that the CFC had not yet given any information on how many entries (and what top masters)  had been received for the upcoming Zonal to be held in May.  The readers may recall that the CFC executive had done nothing at all –either in their budget or to try to organize–Canada’s Championship , which is supposed to qualify one person to the upcoming World Cup in August of this year.  Last month the message boards buzzed , a number of individuals were looking for serious details.
The CFC executive admitted that it had no contingency plans, but to take the heat off of themselves they simply announced some random dates for the zonal.  The entry fee is a whopping $250 per head (gms exempt), all the travelling and lodging expenses are the players responsibility (gms exempt, again) and even worse: the prizes are based on 30 entry fees minimum (and even then, just barely over 50% of the entries are returned as prizes)
Hardly what you would consider a classy operation.  In anycase, as every other zonal has atleast some publicity behind it (the US has done a very public job on their upcoming zonal next month) and announces the players who have indicated they will participate, I don’t think it is asking the CFC executive too much to release some information about their Zonal.  So here goes (again): how many entries has the tournament received so far, and who are the players?
SPRAGGETT ON CHESS
Share