Bits and pieces from this week

http://www.russiachess.org/
Levon Aronian dominated at the 2010 World Blitz Championship in Moscow, Russia. The Armenian scored 24.5 points out of 38 games and finished half a point ahead of Teimour Radjabov from Azerbaijan. Third came Magnus Carlsen from Norway, who won the title in 2009.  CONGRATS!
The World Blitz Championship took place at the GUM department store on Red Square in Moscow, from 16 to 18 November. It was a 20-player, double round-robin tournament with 14 rounds on the first day, 14 on the second and 10 on the final day. The rate of play for all games was 3 minutes plus 2 seconds increment.

(courtesy of chessvibes)
The event was a great success especially from the mediatic point of view.  You can find hours of video streaming at http://video.russiachess.org/ as well as numerous videos at   youtube.  A model organization for anyone interested in how to incorporate IT into your tournament coverage.  Here are a few youtube videos that I got a big kick out of watching.  Enjoy!

WHAT IS THE SECRET OF ARONIAN’S SUCCESS?
TAKE A CLOSE LOOK AT THIS PHOTO BELOW! 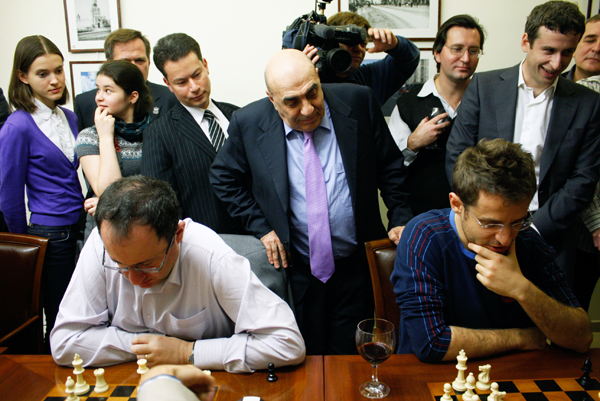