Congratulations to Toronto IM Bindi Cheng for finishing clear 2nd at the strong DC International held between June 27 and July 1 of this year.  Scoring a super 7 points in 9 games, Cheng narrowly missed his first GM-norm because of a technicality.

Toronto IM Leonid Gerzhoy finished in a massive tie with 6 points.  Games can be downloaded/replayed HERE. 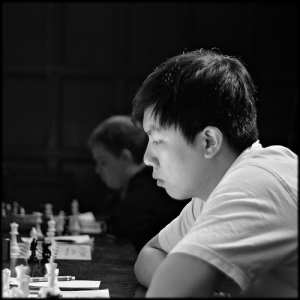 We don’t often talk about Bindi’s chess but we should.  A self-taught player –and an excellent coach–Bindi will no doubt soon become a grandmaster and one of Canada’s elite players.  Possessing a strong work ethic and a real passion for the game, Bindi will be a real asset for our National Team, either as player or captain.

Bindi was the 2006 Canadian Júnior Champion and played first board for the U of T.  He gained his IM title the hard way: none of this shameless  CFC-bullshit,  discouraging strong players from participating in the National championships so that also-rans can get cheap IM-titles.  (Fortunately FIDE has caught on and now this practice has been disallowed).

I am certain that I can speak on behalf of all of my Canadian readers in wishing Bindi the best of luck with his future chess tournaments!

White to play and WIN!