Bindi Cheng has a GREAT idea!! 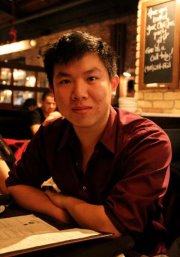 International Master Bindi Cheng  is one of Canada’s hottest young talents and he has a great idea for you amateurs out there who are looking to improve their game with small steps.  Bindi has just started up a youtube channel where he will be providing live ICC coverage to selected blitz games.  The commentary is intended to provide master-level insight and educational tips for the average player.  What is more, Bindi plans to update the channel daily once things are up and running smoothly (this week is for developing the learning curve).

Direct link to youtube channel
” I am just trying my best to provide top quality chess analysis in a fun and educational way. Chess is one of the most popular games in the world and just about everyone has tried it out but very few people actually play competitive chess. I notice that if I didn’t understand how to get past a level in a game or wanted to learn something new I would go on youtube.
Now I’m trying to convert more and more players into the wonderful world of chess and make a positive contribution.  I am currently offering live-casting of blitz games while they’re being played but will offer other things such as in-depth analysis of top GM games, 1-m bullet sessions, dual-commentary and Beginner’s lab, all coming soon if I get some positive feedback! ”
–IM Bindi Cheng
__________________________________________________________________
Bindi Cheng  is an International Master who won the 2006 Canadian Junior Championship & scored top score on top board for U of Toronto in 2011 with 3.5/4 in the Canadian team Inter-university league championship. In 2010, he tied for 1st-2nd with Artem Samsonkin in the (open) blitz championship in Canada.  Bindi can also be found on FACEBOOK
SPRAGGETT  ON  CHESS
Share