link
Twenty-seven year old Polish grandmaster Mateusz Bartel edged out Eljanov and Korobov on tiebreak to take the 11th edition of one of the strongest open tournaments of the calender year.  Congrats!! 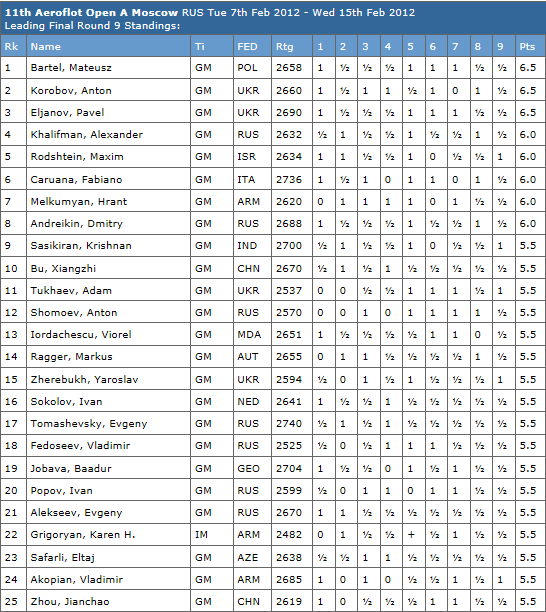 I know Bartel quite well.  We have already met and  played several times in international events and he has been a frequent visitor to Portugal.  A quiet and unassuming young man, Bartel’s style is typical of many of the great Polish players: above all pragmatic; highly tactical, refined sense for the initiative;  excellent technique and opening preparation.
I have always been a big fan of Polish chess and its contributions to modern chess (especially in the area of openings). Rubinstein has always been one of my favourites! Poland is today one of the strongest countries in the world, and I was honored in 2007 when Bartel asked me to be the trainer for the 2007 European Championships (unfortunately, I had to decline because of prior committments).
____________________________________________________________
Probably Bartel’s most impressive win was against top rated Caruana.
POSITION AFTER 19 MOVES
CARUANA

BARTEL
Something has gone wrong in the opening for the Italian star (witness his King) and Bartel–sensing the kill– had just opened the position to activate his Bishop pair.  For the moment it looks as though Black is controlling the vital squares in the centre…
20.Qf3!

The most energetic move!  White is not only threatening to take on g6 (remember the King is in an awkward position), but he is also threatening the stock sacrifice of his Bishop on c6 which should win a pawn or two.  Unfortunately for Caruana, there is no real answer to these problems, but that is no excuse for losing in just 2 moves!:
20…Nxa4?!  21.Bxg6  Rh8?!  22.Bg5!

1-0.
There is nothing to do about White’s coming Re7.  Black must part with his Queen and even then…

SASIKIRAN
Black has a horrible position and he knows it!  His King is exposed and his centre is about to crumble.  And note that virtually every White piece is on its optimum square…it is just a question of White finding the knock-out blow.
Bartel decides (correctly)  to play POKER  and bluff his opponent:
29…Rxg2??!!
This is certainly not a good move, but it worked!  See how the game finished!