Baku: the day after… 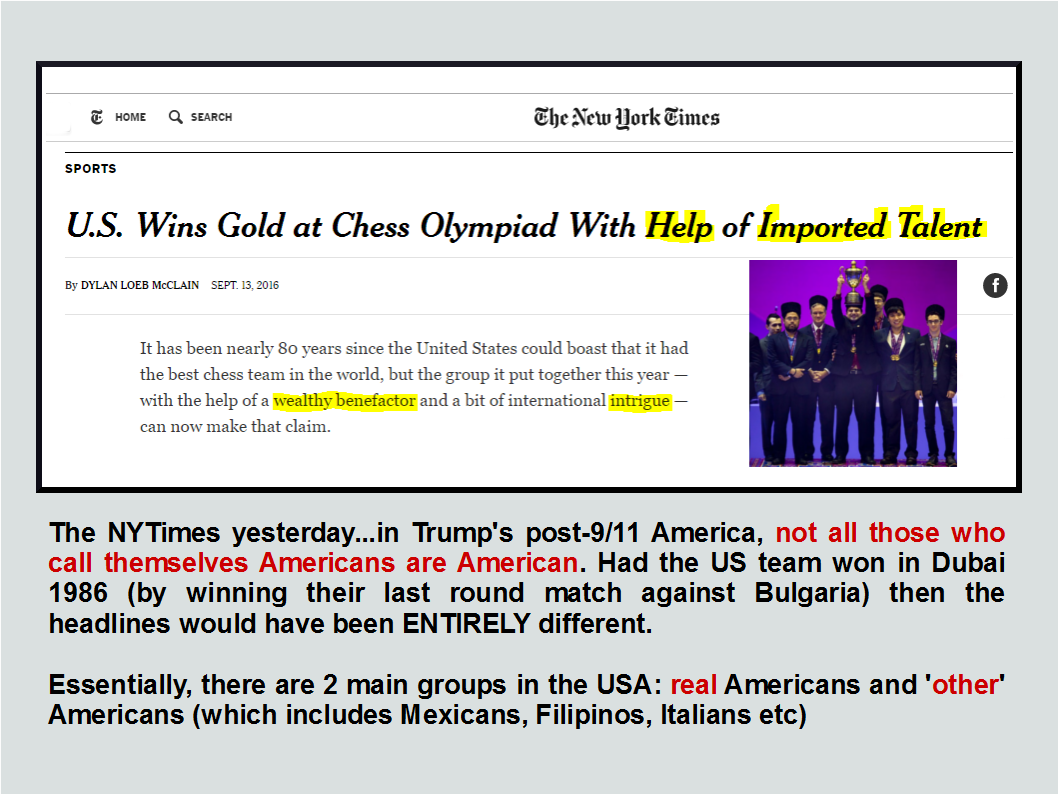 So I suppose there will be no parade thru Times Square, or a visit to Obama’s White House. On the otherhand, with a bit of luck, and assuming that Donald Trump is not elected in November, there will be little risk of any of the US chess team being deported in the near future.

This is the modern world we live in today. Things can change quickly, and often for the worse. 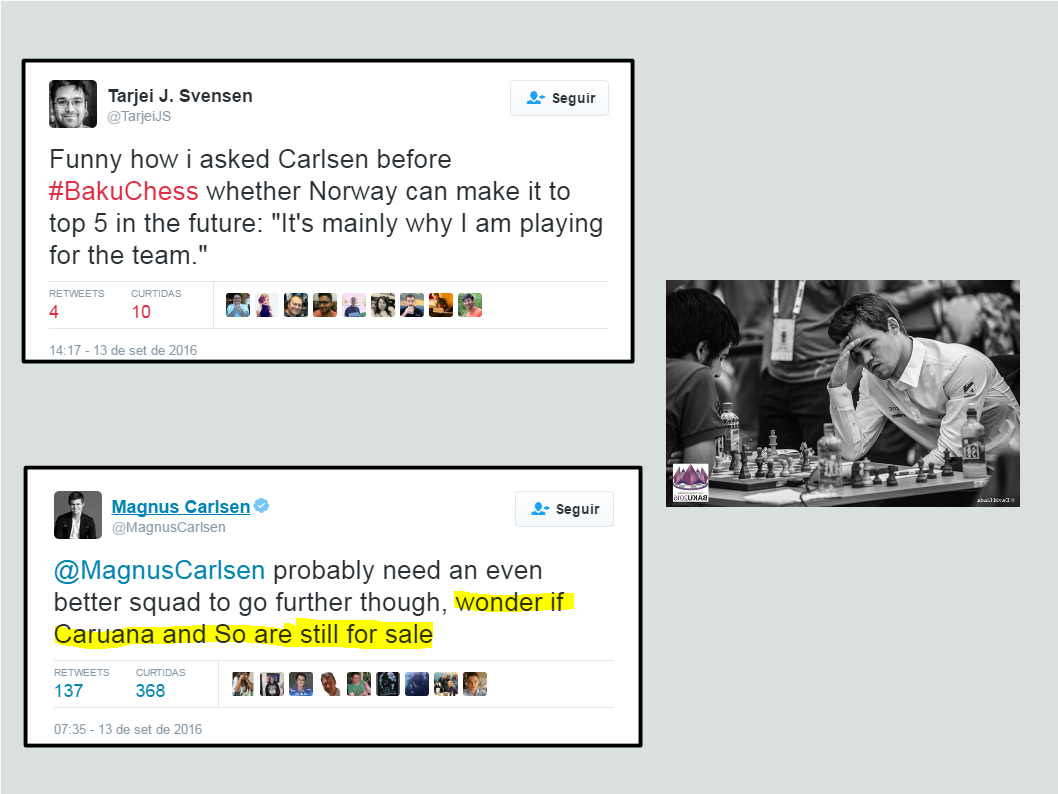 I remember being in Dubai (27th Olympiad) in 1986 when the US had real chances of winning the gold medal (Seirawan had defeated Kasparov in their individual encounter, leading the US team to a well deserved victory over the reigning champions), and for many Americans it seemed likely that they would win the gold medal.  The White House was waiting for that to happen and Reagan was anxious to phone the US team to personally congratulate them. (The players were made known of this plan before the final game)

And the NYTimes headline would have been  “US wins gold at Chess Olympiad“, and not have included the qualifying ” with the help of imported talent“

But that never happened. The US could only draw with Bulgaria in the final round, and the USSR wiped out Poland 4-0 to clinch the gold. President Reagan had better things to do than have personal contact with a Bronze medal winning US team.

Thirty years on, probably Obama is not interested (assuming he even knows)…chess is almost dirty word in America today. Stripped of prestige and rapidly disappearing from important newspapers, our royal game exists almost entirely on the internet, far away from public view. If it were not for a wealthy patron in St.Louis who pays for EVERYTHING in US chess, well…you get the picture.

As of 16:15 September 14 (London time), except for the above mentioned NYTimes article and a few St.Louis news services, not a single major US news service has carried the American victory in Baku. Not TV,radio or internet based.  Says something, doesn’t it! 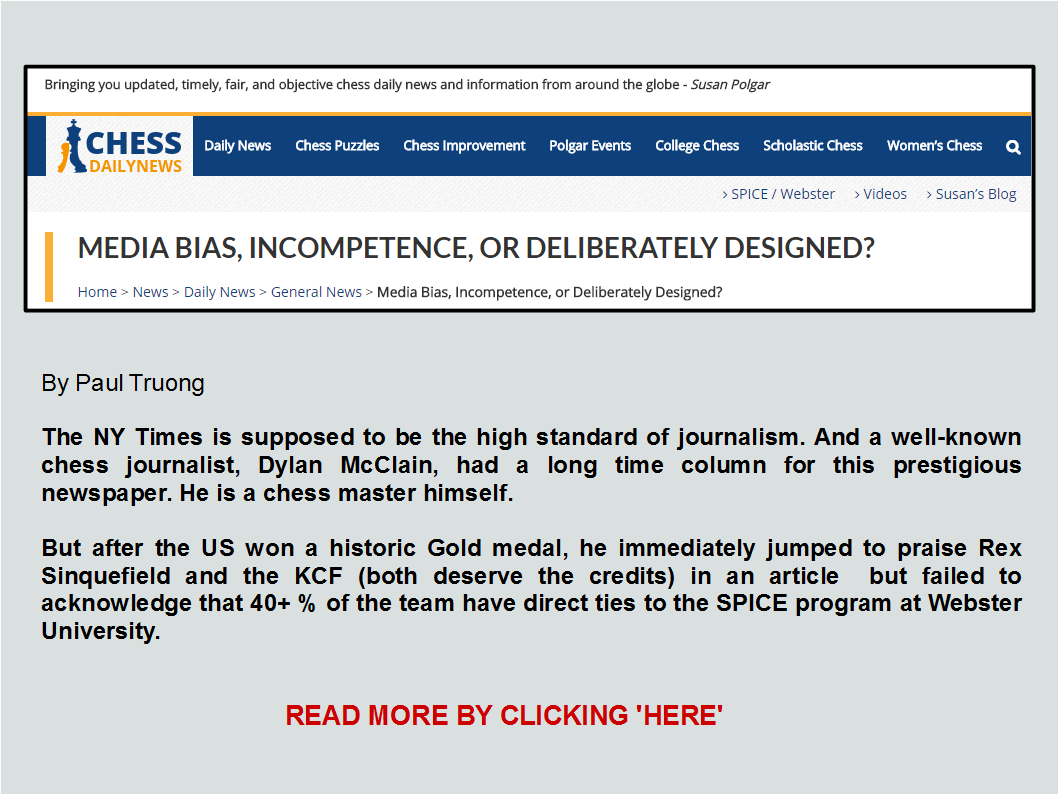 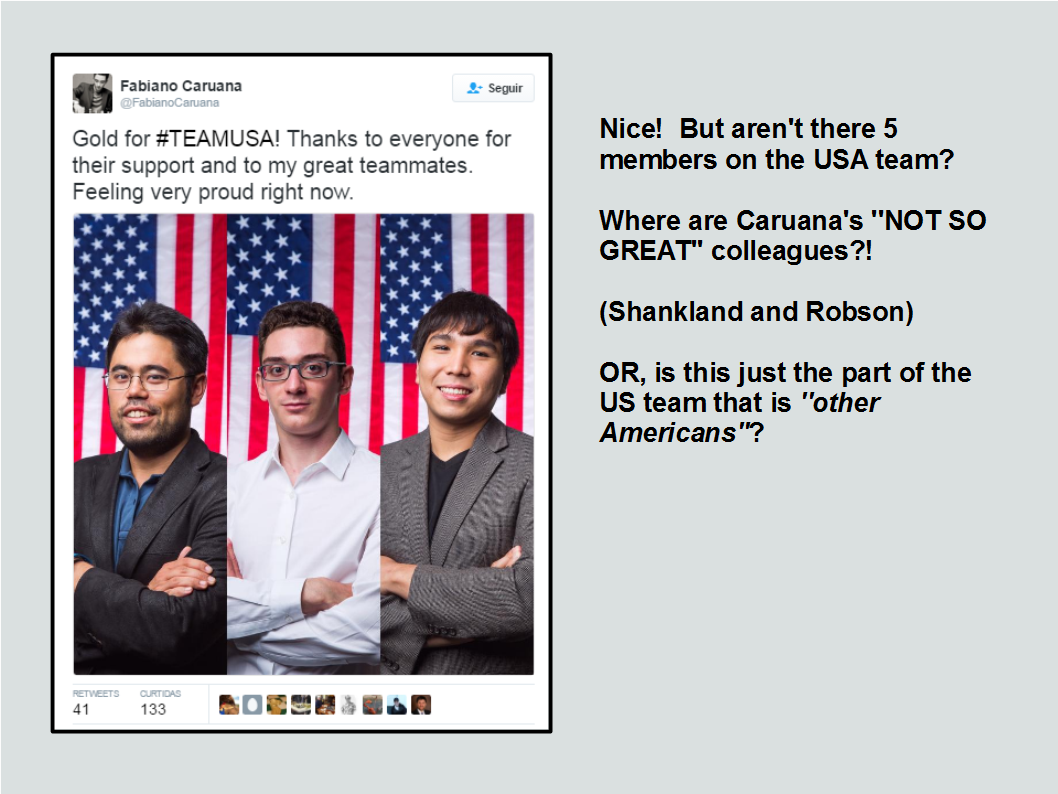 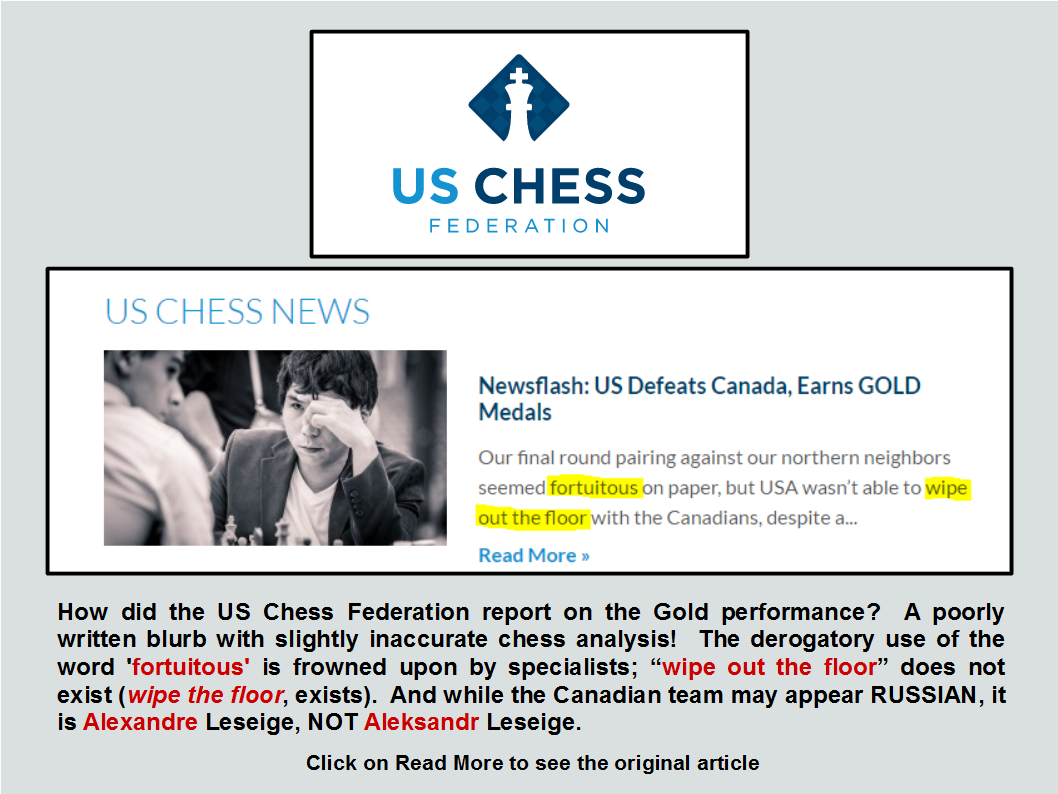 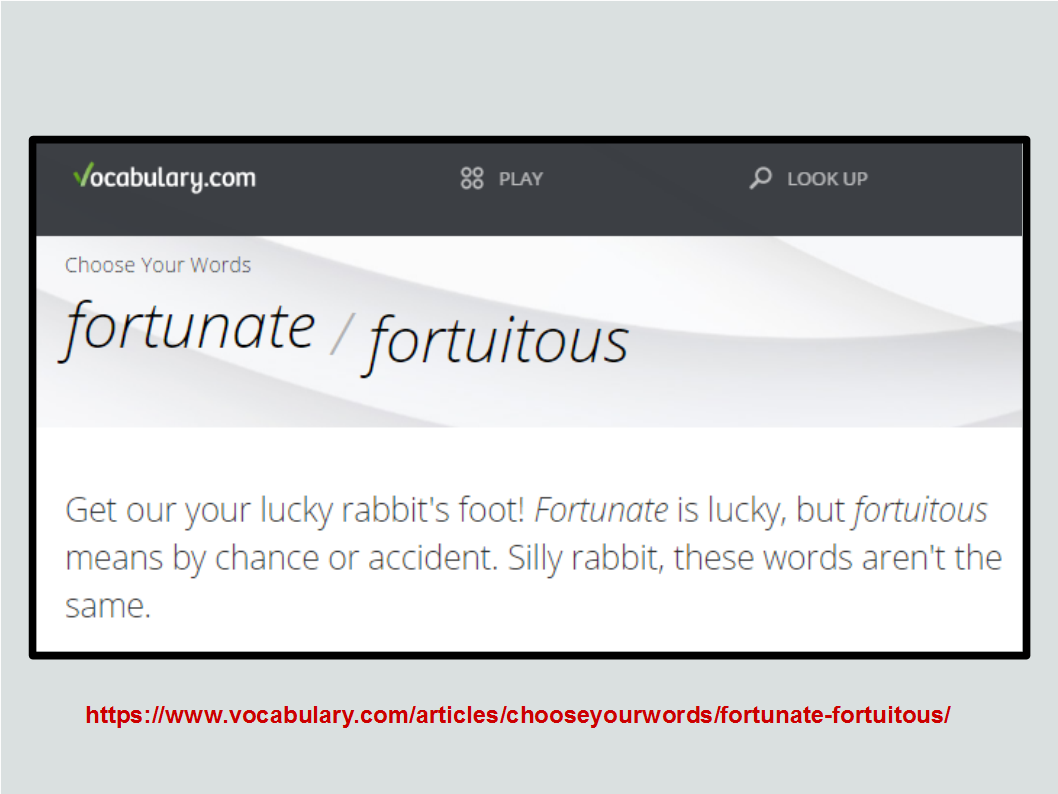 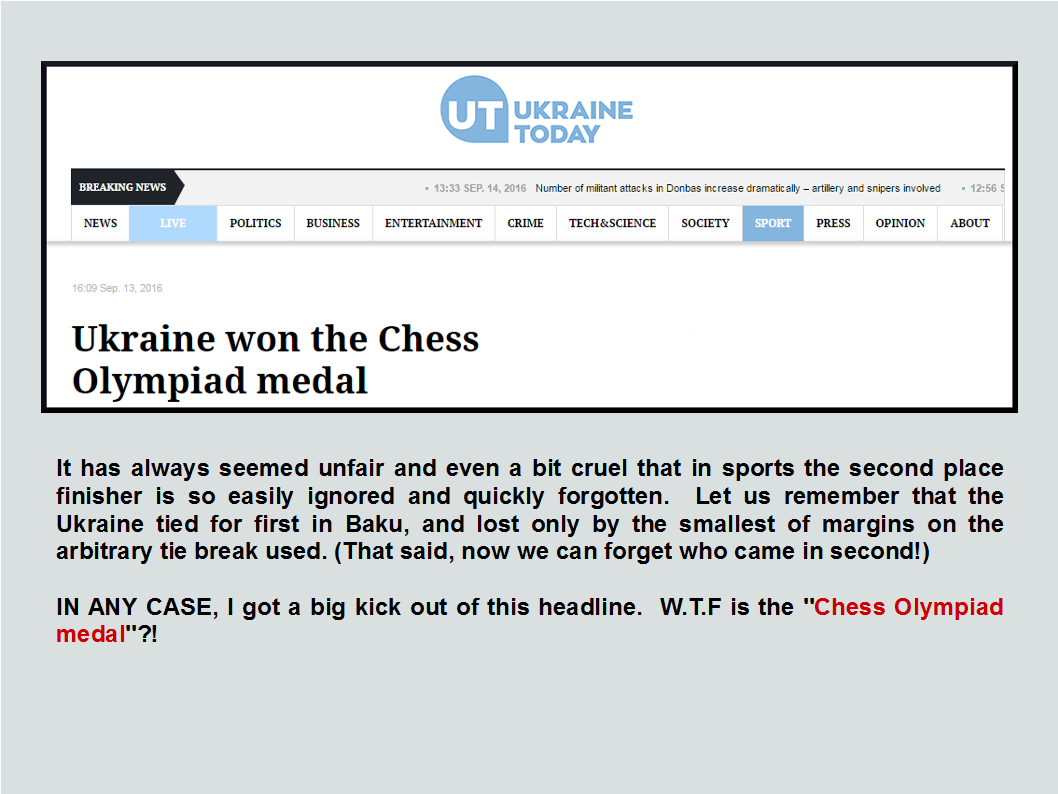 Still absolutely no coverage on the US team’s gold medal in Baku from any major US news services on any of the media (print,TV,internet, radio). What is going on?  It can not be that bad, can it?!  I thought that CNN and FOXnews had no standards…. 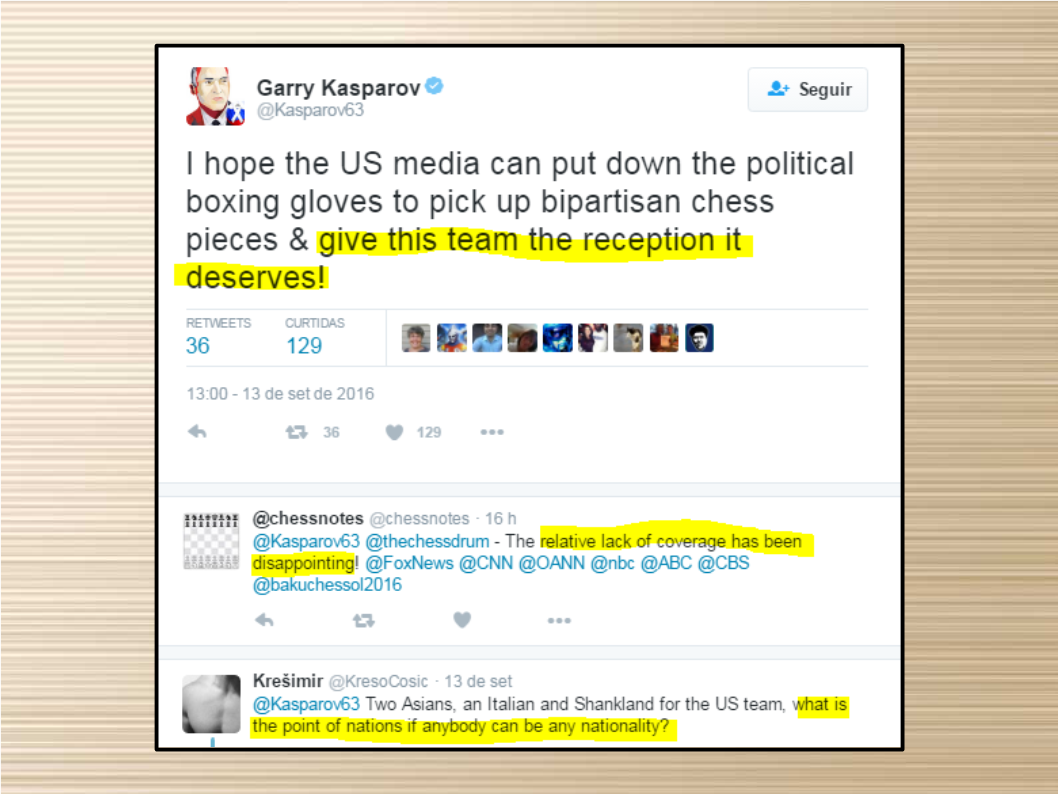