http://euro2011.chessdom.com/
The European Team Championship comes to an  exciting finish tomorrow as the 9th round will see Armenia go face to face with Germany.  If Armenia wins the game, then the title is theirs.  If not, then Germany will prove to be the surprise of the championship.  GOOD LUCK TO BOTH TEAMS!

Armenia has become, in recent years, a super-team capable of winning any championship, be it the Olympiad, World Team Championship or European Team Championship.  While never lacking great players to field its national team in the past, what has changed in recent times is that now Armenia has the necessary stability on board number one to hold his own, and more.

Lev Aronian is the rock-solid player who rarely loses more than just a couple of games a year.  His game is characterized by adherence to sound positional principles combined with Bruce Lee-type over the board discipline.  Give him the slightest edge and Aronian may not win the game, but he will surely torture you for hours on end!
Witness his game today against the Dutch superstar Giri.  Aronian emerged from the opening with a slight edge and while he might have missed a better move at one point (19.c6!), he still ground down his opponent with subtle yet forceful play. 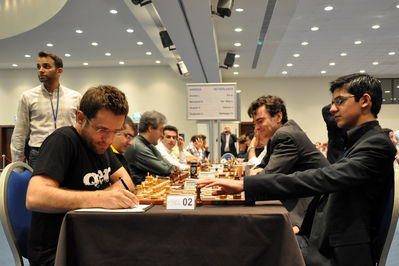 Aronian (left) and Giri (Armenia vs Holland) before play is about to begin. Armenia won 3-1.