Are you up to this challenge?

This is the position after White’s 28th move of the game Ozsvath vs Kluger, Hungarian Championship (semi-finals) 1955.  A violent cut and thrust struggle, both sides seek desperately to mate the other before he gets mated himself!  In this kind of position, everything depends on who has the move and can he profit from this? For example, White needs only to withdraw his Bishiop to deliver mate along the h-file. However,  it is Black’s move in this position.  He knows that he must have a way to win: his Queen, Rook and Bishop are available for the task; the White King has absolutely no defenders!
But how should Black proceed?  He has no time to take the Bishop on h6 because 29.Qxd7 wins (mate threats and Ng4 coming in soon)  Nor can he play 28…Qa5 (threatenting a devastating discovered check) because of 29.Qe6ch mating. And a complete exaggeration would be the brilliant  28…Rb1ch as after 29.RxR Bb2ch 30.RxB! PxRch 31.Kb1 Black has run out of  both pieces and ideas!
It is not easy to see what Black should play.  In the actual game Black did not succeed in finding the path to victory.  Though he correctly realized that there was no forcing sequence of ”check…check…mate!’ moves , and that he needed one more prepatory move inorder for his attack to be decisive, Kluger made a slight imprecision and this gave his opponent the chance to miraculously escape and win the game!
He played the clever looking
28…Rb5?

avoids an immediate and threatens to mate Black along the h-file!

Now Black realized that if 29…Bb2ch White has the simple 30.BxB and the checks soon run out.  So he instead tried the desperate but brilliant 29…Rb1ch which was insufficient (in the game White played the unnecessary 30.Ka2–which is good enough–but 30.KxR! is simplest and Black would run out of checks soon afterwards, leaving Black’s monarch to be mated along the h-file. (see pgn viewer below for the game continuation)
HOWEVER, BLACK DOES HAVE A WAY TO WIN AT MOVE 28!  CAN YOU FIND IT?
(SOLUTION BELOW)

The path to victory is indeed with a prepatory Rook move, but to b6 (not b5–which interferes with the Queen sliding over to a5)
28…Rb6!!

Now White is indeed helpless!  If he tries 29.Bc1 (as in the game) then Black wins with 29…Bb2ch! 30.BxB Qa5ch! (which did not exist in the game continuation because of the position of the Rook on b5!) mating  in 2 moves!  And if White does not take on b2 then he gets mated with the same …Bc1, ….Rb1…Qb5 and …Qb2 mate sequence described above.
Other tries are also insufficient: 29.Rd5 allows 29…Ra6!! with a fast mate along the a-file. Or 29.Nd3 (attacking the Queen and covering the sensitive b2-square) allows 29…Ra6!! (again) 30.Kb1 Qb5! etc  Finally, 29.Be3 goes off to 29…Bb2ch 30.Kb1 Ba1ch 31. Kc1 (nothing better) 31…Rb1ch! and mate soon following.
In sharp and complicated positions such as what arose in this game, nerves of steel are required!  One slightly imprecise move can turn a well-deserved victory into a painful defeat!

Andras Ozsvaith (born Hungary, 1929) is still alive and well.  He is a respected coach. I could not find much about his life on the ‘net. 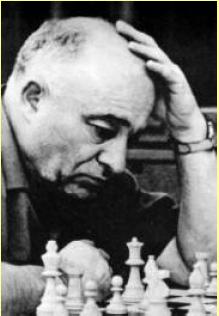 Gyula Kluger (1915-1994, Hungary)
1914 – 15th of January . Born in Sátoraljaújhely – Hungary, commercial secondary school there, 1932 – Schluckenau – Czech Republic – 1st place, Czech master title, 1935 – reaching the Hungarian master title,
1954 – reaching the International master title
1959-63 – first board player in the team of the Budapest Spartacus in the first league of Hungary and he won with the team 3 silver and one bronze medals.
1964 – he played the second board and the team reaches a bronze medal, 1964-67 – second board in the MTK team, new bronze medal,
He had good results in some Budapest championships:
1967 – 2nd-3rd place,
1968 – 2nd-3rd place,
1979 – 2nd-4th place.
He played more than 50 games in the Hungarian national team in International team matches.
1954 – member of the 6th place winner Hungarian team in the Amsterdam chess Olympiad /he played in the 2nd board/, 1960 – second reserve of the 4th place winner Hungarian team in the Leipzig chess Olympiad,
1965 – a member of the bronze medal winner team in the Hamburg European team championship,
He played in many team matches against the the Yugoslav, Soviet and Rumanian team. He played not so many International tournament. He took part in some little events when he was old already. Bukarest, 1954-ben 5th place, 1956-57 Hastings 1st place, 1960 Asztalos memorial – Balatonfüred 3rd-5th,
1967 Debrecenben 3rd-4th,1968 Zombor 5th-6th.
His best games are the wins against the active world champion Tal, Korchnoi, Stahlberg and Gligorich.
He has brought up honestly four children, they like the chess nowadays as well.
23rd of September 1994 Date of his death.
His family played an important role to organize this tournament and to keep the memory of the chessplayer died not long ago. His first son, Gyula / Julius / gave the prize found of the GM-tournament, he is living in the US and he is a leader of an American commercial firm SKYEX.
Source: http://www.teleschach.com/werbung/k…