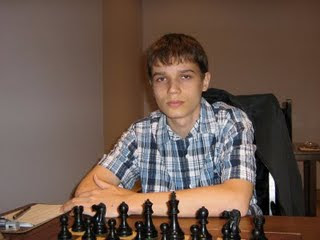 One time child-prodigy and GM Anton Kovalyov was born in the Ukraine in 1992 but early on moved to Argentina where he first learned the game of chess.  In 2007 Anton moved to Canada where he has been living in Montreal ever since. He is presently the highest FIDE rated player resident in Canada.
HOWEVER,  Anton is still listed as an Argentine player (see first link above)  and NOT as Canadian.  This could lead to embarrassing problems for both himself and the organizers of the 2012 Canadian Zonal where he is listed   amongst the participants.  While there has been some talk of Anton changing federations , this requires (according to the appropriate FIDE rules) a process that at minimum involves a 250 euro notification fee as well as a grace period of atleast 3 months–during which time such transfer must be posted on the appropriate FIDE-transfer page.
SO FAR, as the reader can verify via last link, there has been no official notification, and it is not clear if the CFC has taken the necessary steps to facilitate the transfer.  As in all  such transfers, it is the new federation that has all of the responsibility of making certain that the process is followed to the letter as well as that all of the fees involved (notification fee, transfer fee, compenstion fee–if necessary) are paid.
The question is not moot: the Argentine federation still lists Anton as one of its own, still very much eligible for representing Argentina in the upcoming Olympiad in August/September!
Should the issue not be resolved before the start of the Canadian Zonal, then it is entirely possible that Anton’s participation in said tournament could jeopardize the status of the zonal as a qualification event for the world cup.
I will keep the readers up to date as information is forth coming…
SPRAGGETT  ON  CHESS
Share