Don’t say I did not warn you!  The very first day the Baku Olympiad began the complaints started rolling in.  Some arbiters decided to impersonate the ‘Toilette Gestapo’, forcing players who needed to take care of some body functions in private to make a written request first.

Several captains protested strenuously, and a petition was quickly circulated to end this abusive and humiliating practice.

A number of arbiters then tried to justify the above mentioned arbiters’ actions by hiding behind existing regulations that anticipate some sort of control to visiting the washrooms during the normal playing period.

But as Tsorbatzoglou eloquently argued, no rule can ever justify  disrespect, abuse and/or humiliation of anyone while representing his/her country in a prestigeous event.

Then yesterday, the ‘Anti-cheating’ Gestapo decided that longtime Kirsan critic Nigel Short would be their target, but he would have nothing to do with it. He refused to cooperate with them, as a matter of principle.

The incident was described in a  Chess.com article written by Peter Doggers:

Many inside the chess community are fully supportive of Nigel’s actions.  Myself included. I have been a longtime critic of the way FIDE has dealt with the problem of cheating in chess, having written literally dozens of times here on this blog on this subject. 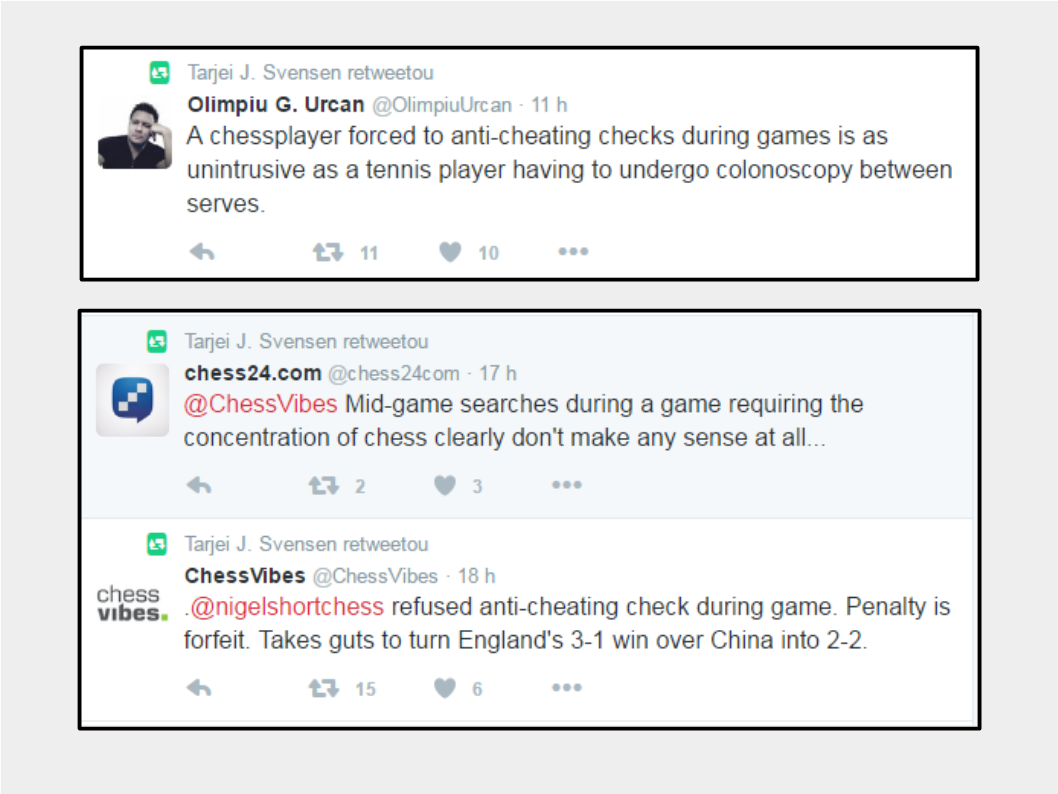 When FIDE first decided to form an anti-cheating commission a few years back, I (rightly) pointed out the error of asking for simple volunteers to become part of the process.  No one paid any attention, ofcourse, and as a result, there were no IT-hardware experts on the new commission, despite that fact that cheating is virtually 100% a hardware problem!

INSTEAD, and probably a direct consequence of having a commission that was blind to the real problem,  initially floated and proposed were ridiculous ideas such as mandatory strip searches , or the creation of a BIG-BROTHER database of games of everyone who played chess, and so on.

This latter idea,  incredibly, was somehow accepted; to filter these games using chess engines  to look for, find and identify ‘cheating suspects’…essentially stigmatizing and OVERWHELMING the entire anti-cheating commission with McCarthy like paranoia where EVERYONE becomes a potential suspect until they can prove their innocence!

I don’t know where all of this is going to lead, but I think that FIDE has to admit that a HUGE mistake has been made.  FIDE should seriously consider dis-banding the current anti-cheating commission and start over. Not from scratch per se, but learning from its mistakes. This time NOT a group of volunteers (who in some cases clearly are unfit for the job or are only interested in self-promotion), but INSTEAD  experts should be INVITED to become part of the next committee.

Ofcourse, I have little faith that this route will be investigated, and so more controversy and scandal can be expected.