One of Europe’s most famous OPEN tournaments , the traditional Andorra Open, saw Norwegian GM Jon Hammer take first prize with a score of 7 points out of a possible 9.

Link
This year was the 30th consecutive edition.  Also scoring 7/9  were Kiril Georgiev , Miguel Illescas and Julen Arizmendi.  A total of 146 participants took part, including numerous gms and ims from all over the world. 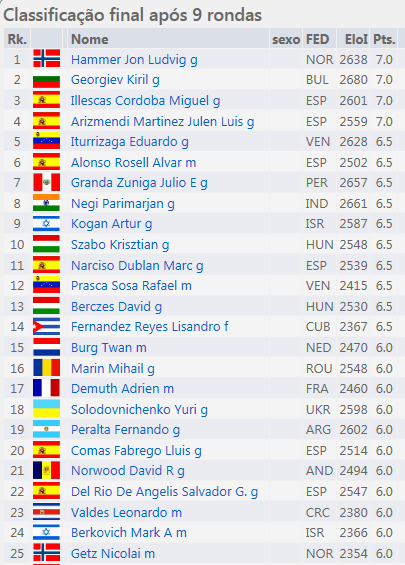 Jon Hammer (born 1990) is of the same generation as top rated Magnus Carlsen and is the 10th grandmaster to be born in Norway.  His current rating is 2647.  Hammer’s achievements have been quite impressive , but they have been overshadowed by Carlsen.

Curiously, Norway will not be fielding a team to the 2012 Olympiad in Istanbul.  This inspite of the fact that the 2014 Olympiad is to be held in Norway!  Apparently a combination of disputes regarding starting fees as well as Carlsen not wanting to risk his rating against ”mere” 2400’s (the Norwegian team is not strong enough to finish in the top 10 places) is the reason the Norwegian Chess Federation has decided not to send a team.

Even so, one would think that it is absolutely necessary to send a team in light of the fact that the 2014 Olympiad is slated for Norway…

One of the best games from Andorra!

WHAT IS WHITE’S STRONGEST CONTINUATION?