I came upon some great photos and video/audio of the legendary Alexander Alekhine. Enjoy! I have added some commentary and chess tidbits along the way. The recordings are towards the end of the article.

Alexander Ivanovich Alekhine (1856-1917) was a Marshal of the Nobility in the Voronezhsky region. He was a wealthy landowner and also a member of the Duma. He liked to gamble in Monaco, where he is reputed to have lost 15 million rubles in one evening! Alexander was killed by the Bolesheviks, and the entire family fortune confiscated. Anisia Ivanovna Alekhina (1861-1915), his mother, introduced Alexander Alekhine to chess when he was 7. She was from the rich family of manufacturers, the Prokhorovs.

1900 Alekhine-Prokhorov Family: Right-mother Anisya Ivanovna (Prokhorova); Center grandmother Anna Alexandrovna with grandchildren: Alexander (right), Alexey and Barbara. It was Alekhine’s mother who taught him the moves as a child.

The Family Alekhine in 1901. At table right-Alexander, left his elder brother Alexei. Rear is Alexander Ivanovich (father). Sitting in front of him is daughter Barbara, wife Anisya Ivanovna and German Governess Maria Fedorovna Kessler.
Alexei Alekhine (1888-1939), Alekhine’s brother, was a very strong chess amateur, he was a champion of Kharkov (big Ukraine town), and did a lot for the chess movement in Russia (as chess journalist, writer and organizer). Alexei later publically denounced his brother for his anti-soviet statements. Varvara Alekhina (1889-1944), Alekhine’s sister, was a Russian film actress.

Source: Russian edition of the St Petersburg, 1909 tournament book. The position on the board is from Alekhine-Gregory at the 23rd move. The vase was a gift from the Czar himself and was the only possession that Alekhine could take with him when he finally decided to leave Russia for good in 1921.
Fate could be very brutal in those years immediately following the Russian Revolution. In 1918 Alekhine was a criminal investigator in Moscow, but in 1919 he was imprisoned in the death cell at Odessa, suspected of being a spy! In 1920 Alekhine was back in Moscow intending to be a movie actor, where he also served as interpreter to the Communist party and was appointed secretary to the Education Department. Fed up, Alekhine hastily married a foreign Communist delegate and left Russia for good.

1912 Stockholm The law students wore coats with rows of buttons down the front. Handsome and wealthy, Alekhine was a typical member of the ruling elite of Russia (an aristrocrat).

1920 Romanovsky-Alekhine (this time they drew in 9 friendly moves!) They seem to impatiently wait for the photographer to finish his business so that they could slip out !

1927 Buenos Aires, pre-match photo. It was this match that really put chess on the map, and marked a turning point in the history of the game. A russian had won the world title for the first time!

1928 with his third wife, the Contessa Vasiliev. Marcel Duchamp stands behind her left shoulder

Alekhine and wife in Paris 1928. The expatriated Russians celebrate his World Championship. It was here that Alekhine , only too happy to play to an admiring and grateful audience, spoke of a doomed future for the Bolsheviks. It would haunt him the rest of the days of his life and earn him the hatred of the Kremlin.

1929 Karlsbad – Alekhine did not play, but was a journalist for the New York Times covering the tournament

18 August 1930 Simul in Liège, Belgium.In front of him is Louis Malpas, chairman of the Liège Club

1932 California . Reuben Fine wrote ”Alekhine was the sadist of the chess world. When I first met him in 1932, I began to understand the secret of his genius. He was showing a game with Euwe played at Berne a few months earlier, and his eyes and bearing had a strange intensity, which I had never seen before. The man loved chess; it was the breath of life in him…” Ofcourse, Fine never liked the person Alekhine was. 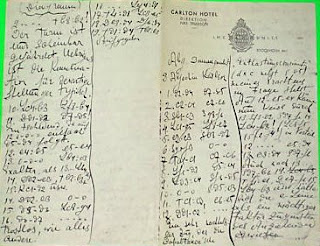 Alekhine´s annotations to his games with H. Carlson and A. Mellgren in the Örebro tournament in April 1935. They appeared in Tidskrift för Schack 1935 No.4. They are written on the stationery of the Carlton Hotel in Stockholm where Alekhine stayed after the tournament.

Alekhine narrowly lost his world title in 1935 against the Dutchman Max Euwe, but won it back in 1937

1938 AVRO. The first round. Alekhine v Reshevsky(absent); Botvinnik v Fine(absent), Sunday 6 November. Right before the first round, both Alekhine and Botvinnik agreed in principle to play a match for the World Title, regardless of the result of the tournament. This upset all of the other contestants.

1944 Gijon with Arturo Pomar (Alekhine could only make a draw with the 13 year old prodigy) During the war, Alekhine played excellent chess until he arrived in Spain (1943). Of the 7 Nazi-organized tournaments he played in, Alekhine won 3 outright, tied for first in another 3 , and in the other finished in a tie for 2nd. He certainly was still a worthy champion! But that changed once in Spain; he drank even more, and his health deteriorated. A spanish doctor (who was also a chessplayer) told Alekhine that even if he stopped drinking he would not likely live more than a few more years! Alekhine replied that in that case it seemed pointless to stop drinking…

Montparnasse Cemetery in Paris . Alekhine was re-buried here 10 years after his death, on March 25th 1956, at the request of his wife. Present was the FIDE President Rogard, as well as a strong contingent from the USSR, including Smyslov, Keres, Bronstein, Geller, and Petrosian . Botvinnik was absent. Not one word of the ceremony was printed in the French media. This was taken as a sign that Alexander Alekhine had still not been forgiven for being a nazi collaborator during the Second World War.