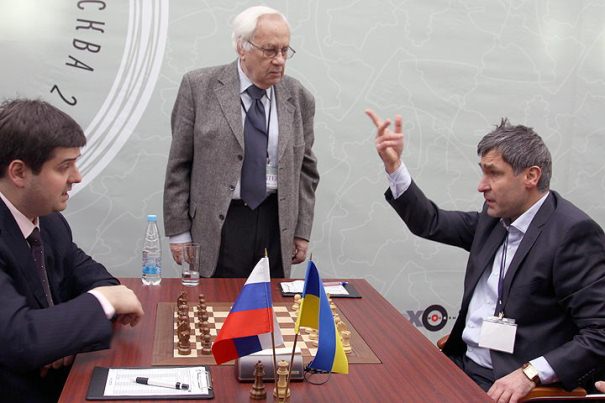 From today’s first round of the Tal Memorial in Moscow. Ukraine’s V.Ivanchuk (right) seems to be giving Russian Champion P.Svidler the finger (!), while the arbiter looks on in disbelief!   BUT this is not the case, as WhyChess? explains:
”The last person to rush onto the stage, literally just before the clocks were started, was Ivanchuk. He was somehow absolutely distraught. His eyes were bulging, he took off and then again put on his jacket, he tried to tame his unruly forelock and… he spread his arms theatrically: “Where’s your clock? Why don’t you have a clock in the corridor or the rest room?!? That’s unacceptable! And what if I’m late for the game?” They calmed him down as best they could and promised to arrange a clock – for him personally. But he still took a long time to calm down.
During all that time his opponent, Svidler, didn’t say a word. He sat and observed the whole commotion around their table… Even after that he sat there motionless for a few more minutes, until he returned to reality and nevertheless made the first move. In general, the pieces moved slowly in their game, almost ponderously. While Anand and Karjakin had rattled off 16 moves on the neighbouring table Vassily and Peter had yet to play six. They slowly shifted their gaze from the board to the audience and back, doing their utmost not to look at each other.
It might be speculated that the disturbance at the beginning affected Svidler more than his opponent …”
SPRAGGETT ON CHESS
Share