A not so modern brilliancy!

What makes a chess game ”brilliant” is something a bit subjective and can vary from individual to individual.  However, most experts agree that a brilliant game should contain at least one spectacular move or concept (usually a sacrifice)  that is as  aesthetically appealing as it is unexpected.   Such moves we do not quickly forget and chess history proudly boasts of several hundred chess brilliancies….they have all become part of the game’s immortality.
I came across today’s example given  here quite by chance: I was flipping thru a  first edition of ”Cien Partidas de Ajedrez” (Dr. R.Rey Ardid, 1934) that I had acquired years ago,  and my eye caught a position from the  game Dr. Ramon Tramoyeres against Valentin Marin  (Valencia, 1932): 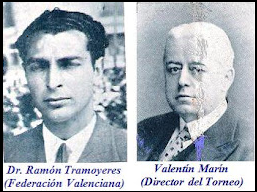 Dr. Ramon Tramoyeres
White has sacrificed a pawn for the initiative and it is clear that he has more than enough compensation.  Especially, Black’s weak e-pawn and  undeveloped Q-side bode poorly for Black’s future….
There are a number of strong continuations for White to choose from here, probably the most clinical being 18.Ne4.  HOWEVER, Dr. Tramoyeres’ imagination could not let pass a remarkable  opportunity here to create a brilliancy:
18.Rhf1!!

White  ignores the attack on his Queen and lines up his Rook on an empty file!
THE GAME CONTINUED:

White reveals his idea and what an absolutely brilliant concept it is!  First White sacrificed his Queen and now he offers a Rook!   Tramoyeres threatens a decisive double-discovered checkmate, one  of the most fearsome moves in chess…certainly enough to give you nightmares for the rest of your natural life!
Now it is time for Black to take stock:  he can not take the Rook because it would lead to a mate in 2 moves on the back-rank.  Nor does Black have a rational deflecting move that can create a counter attack.  Black has nothing better than to buckle his seat belt and  create luft  for his King… hoping that  the double-discovered check that he can not avoid is survivable!
19…h6!

Now White is threatening another double-discovered checkmate!  The Knight can not be taken as it is mate in 2 moves, so Black must take the Rook on h6.  But how should he capture the Rook: with his pawn or with his Rook?

Probably already short of time and a bit flustered by the dramatic change in events, Marin blunders.  He had to take with the Rook, though admittedly he would face a long and arduous (and ultimately futile) defence after 22.Nc7-ch and 23.NxR, leaving  White with both a positonal and material advantage.  But Black could still resist for another 20 moves or so…
INSTEAD, now Black gets mated!
22.Ne7-dbl check!

Do the readers see how?