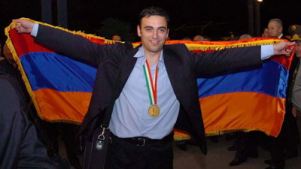 OUT- SURVIVING THE OPPOSITION!

LOMINEISHVILI
A difficult position to assess; the Black King is pinned down and his Rooks can not communicate with their companions. On the other hand, the White King is no safer , having castled on the Queenside where the White pawns are weakest.  Conclusion: both sides stand badly!  In such cases the more resourceful player  usually wins.  One slip and it could become immediately fatal, so it is important to keep one’s head above water longer than his opponent (!)…
Black’s last move is a deep trap that White unluckily walks into.  White should play the safe 20.Kb1 here, ignoring the Greek gift on h8.  Instead, temptation ruled…
20.BxR ?

No doubt White was prepared to defend against the Black attack commencing with the obvious 20…Qxa2 with the solid 21.Bc2!  However, it must have come as a very unpleasant surprise when Black uncorked the deep idea of her last move:
20…Bc8!!

A brilliant idea that removes the White Bishop from its defensive role.  Probably best now is to retreat the Queen to e2 and after Black takes the Bishop on f5 to play f3 (threatening e4–shutting out the Bishop) and pray!  Instead, White took the Bishop
21.Bxc8  Qxa2!

A very original position!  Now Black has a winning attack!  In order to defend against the threatened mate in 1 White must return material and try to flee with his King over to the Kingside.

Black must have been so focused on White’s Qh5 idea (17.Qh5 Rf7! defending) that she overlooked White’s stunning reply!  WHITE TO PLAY AND WIN!

The cruncher!  Threatening mate, Black has no choice but to capture the Rook.  But then the opening of the g-file brings in the other White Rook with devastating threats.  The game did not last much longer.  Play over the game on the pgn viewer below.

Black must have been surprised by this last move–the Black Queen has no escape–and immediately resigned.  But there was no need for it!  Infact, Black is somewhat better here:
10… cxb4! 11. cxb4 Bxf1 12. bxa5 Bxg2

With Rook, Knight and pawn for the Queen, Black can look to the future with optimism!
MORAL OF THE STORY:  MAKE DAMN SURE YOU RESIGN FOR THE RIGHT REASON!
More to soon follow
Share