2011 Capablanca Memorial: our man in Havana 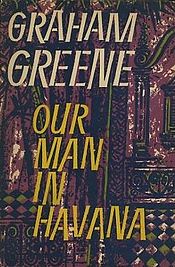 Graham Greene’s 1958 novel ”Our Man in Havana” was made into a successful Hollywood film– barely a year after being published– staring Alec Guinness and Ernie Kovacs.  While having little to do  with Castro’s Cuba–Castro and Che were still fighting in the mountains– this spy thriller does have a number of scenes that capture the romantic essence of old Havana…and made that much riskier with the addition of  cheap liquor.


Ofcourse, you may have noticed that  that was checkers   they were playing in the film–not chess–and so you are probably wondering what this has to do with the 2011 Capablanca Memorial… so bear with me a few more moments… Last week I wrote that I favoured the chances of Cuban superstar Lazaro Bruzon in the tournament (even though he was in last place at the time of writing) and that I expected (hoped) him to  make a stunning comeback and win the tournament ,reminiscent of Bobby Fischer’s 1966 Piatgorsky Cup comeback.

Fischer started badly, scoring only 3.5 points in the first 9 games, but then turned on the gas and scored an amazing 7.5 points in the second half, finishing just a half-point less than Boris Spassky.

GM  Lazaro Bruzon (born 1982)
So I suppose that makes Bruzon this blog’s ”Our man in Havana”…unfortunately, Bruzon’s comeback has failed to materialize as of this writing and the tournament is almost over and Bruzon still finds himself in the cellar with only 1.5 points after 7 rounds.  (The tournament ends soon, only 3 rounds remain).

Perhaps I was overly optimistic of his chances, but the past year saw Bruzon score one tournament victory after another, bringing his rating up to close to 2700.  Only this year he won the American Continental in Mexico and also easily qualified for the World Cup from the zonal organized in the  Dominican Republic. Last year he toured Spain, winning virtually everything he played in.  Bruzon seemed unstoppable…

So what happened in Havana?  Simply, the man ran out of gas!  Bruzon’s game have featured one-move blunders and –if that is not enough (!)-bad luck.  None of his games seem to have the usual magic that we have grown accustomed to in recent times….

Even Bruzon’s only win (against Ivanchuk) was hardly deserved:

Bruzon had to suffer for most of the game before reaching this objectively drawn position.  While a pawn down, Black’s active King and Bishop prevent White from making progress.  Especially, having all of the Kingside pawns on the light-squares cuts down on White’s options.

On the otherhand, Black can not do anything either: his King has no entry points.  I think that it is now correct to just repeat moves (moving the King back and forth).  Instead, Ivanchuk now made a desperate attempt to win with  82.Ne2?! and after 82…Kb3!  83.Nd4-ch KxP  84.Nxb5  Bc4! Black is the only one with any winning chances!
Bruzon eventually won.  Here is the game
.

So the credit for the one game that Bruzon has won so far really should go to Ivanchuk, who committed suicide trying to do more than a draw…
Luck is a funny thing…while chess players make luck for themselves, normally it evens out after a number of games.  That leaves one with the conclusion that our bad results are usually because of…our own bad play!
The game between Bruzon and Navara was an unfortunate loss for the Cuban, having defended a slightly inferior position for most of the game and finally reaching a drawn Rook and Pawn vs Rook and Pawn ending…and then losing it with one careless move!

BRUZON
Black is a bit better because he is ahead in the race with his b-pawn, but the game is objectively drawn since the reduced material means that White should (in the worse case scenario) be able to sacrifice his Rook for the last Black Pawn and then get a drawn Rook vs Pawn ending with his g-Pawn.
However, ”should” does not always mean ”will”, and when one is short of time and relying on the 30-seconds per move then it is only too easy to make imprecisions.
Here the obvious move (75.g4) loses to 75…Rc3-ch, which forces the White King back and then after 76…Ka3!  Black will eventually force a Rook vs Pawn ending where the White King will be separated from his g-pawn, allowing Black to easily stop the Pawn from Queening.
However, the position is a dead draw after the natural 75.Rf8!, moving his Rook behind the Black b-pawn and only then advancing his g-Pawn.  A likely line would be 75…b3  76. Ra8-ch  Kb4  77.Rb8-ch  Ka3  78.g4!  b4  (78…Rc4!?  79.g5! is also drawn)   79.Ra8-ch Kb3  80.Rb8-ch  Ka2  81. Rxb2-ch! and 82. Ke4 etc, as the reader can easily verify for himself.  The Black King can not get back in time to stop the advancing White Pawn.
INSTEAD, Bruzon halucinated with 75.Re4?? (he must have felt that the lateral attack on the Black Pawn was as good as the attack from behind)  and after 75…Ka3!  Bruzon could find nothing better than now moving his Rook to the backrank with 76.Re8, but the difference is that now Black wins because he has an extra tempo after 76…b3!  The readers would be advised to play over this instructive Rook and Pawn ending:
[Event “Capablanca Memorial Elite”]
[Site “Havana CUB”]
[Date “2011.5.18”]
[Round “7”]
[White “Bruzon Batista,L”]
[Black “Navara,D”]
[Result “0-1”]
[Eco “C77”]
[Annotator “”]
[Source “”]

BRUZON
No doubt Bruzon was counting on 29…Rc8, when he could continue piling up pressure with 30.Rcd1
HOWEVER,  the talented Russian created complete chaos with the unexpected
29…f4!? and after 30.BxR fxg3!!

White is a whole Rook up but Black has dangerous threats (such as …Rf8).  It is not easy for White to find the best line of play, but Bruzon’s choice (31.Qh5??) was a real lemon and all of a sudden the Cuban found himself in a lost position!